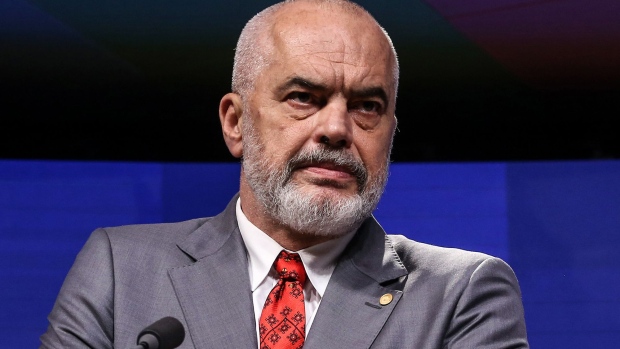 (Bloomberg) -- The UK has failed for years to take seriously the issue of rising asylum-seekers despite repeated entreaties to do so, Albanian Prime Minister Edi Rama said, accusing the British government of trying to create a narrative that blames his country.

British policies have led to this “disgrace,” Rama said on Monday in an interview at his office in the capital Tirana. It’s up to UK politicians “to govern their country,” close loopholes in policies and tackle the criminal groups that exploit them to facilitate migration from the Balkan nation, he added.

Britain is grappling with a surge in the number of immigrants who cross the English Channel in small boats, which Home Secretary Suella Braverman described in October as an “invasion on our southern coast.” Albanians account for more than a third of the 33,000 who arrived in the first nine months of the year, and officials attribute that to Albanian criminal gangs establishing themselves in northern France.

But Rama argued that it’s unfair of the UK to suggest that gangs acting as intermediaries were made up of Albanians, saying they’re criminals from multiple places.

“It’s not solvable if they feed themselves and the people a narrative that it’s a group of Albanians that is doing all this,” he said. “To treat these poor kids, who are crossing the Channel, like Ragnar Lodbrok and Vikings invading East Anglia, this is ridiculous.”

Albanians seek political asylum not because they face persecution at home but because it’s a pathway to a job market that excludes them, said Rama, who has been the nation’s prime minister for nine years.

The UK government said in a statement that it continues to “work closely” with the Albanian administration, and that Prime Minister Rishi Sunak agreed on a call last week with Rama that “more needs to be done to address illegal migration, intercept the work of criminal gangs and close loopholes which prevent the rapid return of failed asylum seekers.”

While the Balkan country of 2.8 million people received the status of candidate nation for European Union membership this year, its citizens need a visa to enter the UK. And after Brexit, the ability of workers to move in and out of the UK with ease has fallen further.

In October, UK Clandestine Channel Threat Commander Dan O’Mahoney said that between 1% and 2% of the entire adult male population of Albania had traveled to the UK in small boats. “The rise has been exponential, and we think that is in the main due to the fact that Albanian criminal gangs have gained a foothold in the north of France and have begun facilitating very large numbers of migrants,” he told the House of Commons Home Affairs Committee.

Rama said that even though it’s late, it’s still good to “address this issue in the British system and to not grant political asylum in such proportions that makes it look like people are escaping from a war.”

Over the long-term, it would make sense for Britain to open its labor market to workers from Albania as that would guarantee free movement of people and spare them from getting there in such “crazy situations,” the prime minister said, referring to dangerous crossings in small boats of the world’s busiest shipping lane.

He welcomed an idea raised over the weekend by UK Immigration Minister Robert Jenrick that that would bar Albanians from applying for political asylum, given their country is demonstratively safe.

Rama said he has discussed the issue with many British prime ministers, including Sunak. Calling last week’s conversation with the current premier a good one, he nevertheless expressed doubts over whether much will come out of it, having had similar discussions with other leaders who he said then failed to take action.

What May Drive Albanians Crossing the English Channel to the UK

The key move is the ability to target international gangs that are organizing and profiting from the surge, he said, adding that nations should work together swiftly to do so.