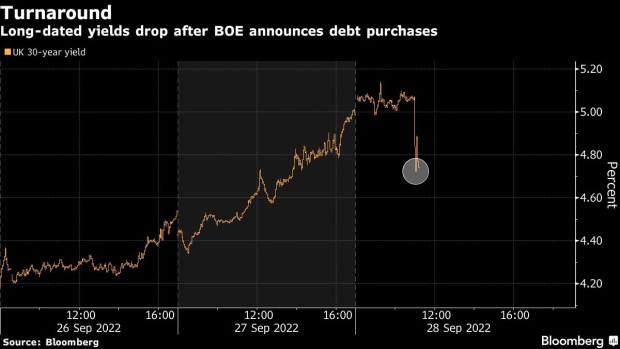 (Bloomberg) -- UK 30-year bonds posted their biggest-ever rally after the Bank of England stepped in to halt a market crash fueled by forced selling from pension funds.

The yield on the securities plummeted 106 basis points to 3.93% after the BOE said it would buy an unlimited amount of long-dated bonds until Oct. 14 and delayed planned bond sales under its quantitative tightening program. That’s the largest drop in data going back to 1996.

The moves injected some desperately-needed confidence into the nation’s bond market, which showed signs of collapsing in the wake of the government’s plans to slash taxes and ramp up borrowing. Frantic selling since Friday -- driven largely by pension funds rushing to meet collateral calls -- had pushed the yield up more than a percentage point to as high as 5.14%, a level last seen in 1998.

The UK Pension Problem That Threatened to Wreck the Gilt Market

“We have been seeing a disorderly rise in long-end gilt and linker yields in recent days which could have driven a further uncontrolled rise if left unchecked,” said Daniela Russell, a rates strategist at HSBC Holdings Plc. “In recent days, thousands of pension schemes have faced urgent demands for additional cash to post as collateral to meet margin calls.”

Pension funds often use leverage to fund liabilities that stretch decades into the future and had to post collateral as the market started tanking, forcing many to liquidate their positions. The sudden spike in gilt yields over recent days was particularly worrisome for so-called liability-driven investment strategies, which are popular among UK pension programs.

The BOE acted after being warned by investment banks and fund managers in recent days that collateral calls as soon as Wednesday afternoon could trigger a further crash in gilts, according to a person familiar with policy makers’ decision making. The UK pensions regulator said it was monitoring the situation closely.

The central bank kicked off the plan on Wednesday afternoon by purchasing just over £1 billion ($1.07 billion) of securities maturing in 20 years or more, less than the £5 billion it said it was prepared to buy at each auction.

“Today’s announcement will stem some of the tide of selling flows we were expecting this week, but the announcement is only a sticking plaster to a much wider problem,” said Bethany Payne, a portfolio manager at Janus Henderson in London. “Certainly, the market would have benefitted more from the government blinking first, not the other way around.”

The pound fell as much as 1.8% after the BOE’s announcement, edging back toward a record low. It recovered losses to trade 1.2% stronger at $1.0856 as the dollar retreated against all of its Group-of-10 peers.

The BOE announcement came as banks were selling a £4.5 billion bond sale by the Debt Management Office, an increase of an outstanding green gilt that matures in 2053. Orders passed £30 billion in contrast to last year’s previous offering of the same bond, which drew a much heftier £74 billion orderbook.

The fact that the debt syndication was lower than some predicted gave a “very bad signal about the lack of real investor interest in long gilts,” said Mike Riddell, a portfolio manager at Allianz Global Investors. NatWest Markets had expected the offering to be around £5 billion ($5.4 billion).

The bond priced at 1 basis points above an outstanding 2052 bond, according to a person familiar with the matter, who asked not to be identified because they’re not authorized to speak about it. The transaction was delayed after the death of Queen Elizabeth II earlier this month.

The BOE’s decision was recommended by the Financial Policy Committee amid fears of a “material risk” to financial stability. It highlights the challenges that policy makers face as they try to roll back years of monetary stimulus just as economies the world over sink into recession.

“It is a temporary liquidity injection,” Riddell said. “But the bigger picture is that this could be the first DM central bank that is pivoting, where what is a temporary measure could well become long term.”