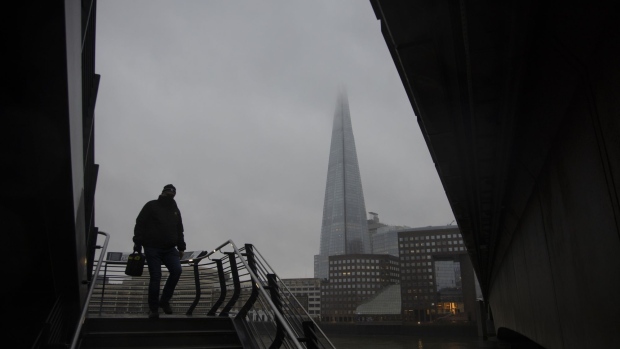 A commuter walks down steps in view of The Shard in the City of London, U.K., on Monday, Feb. 15, 2021. The U.K. recorded 15 million vaccinations against the coronavirus, a milestone that is set to increase pressure on Prime Minister Boris Johnson to begin reopening the economy. Photographer: Jason Alden/Bloomberg , Bloomberg

UK business executives are the most gloomy on their outlook for the economy since the early days of the pandemic as rampant inflation and Brexit difficulties shatter confidence.

The Institute of Directors’ survey of more than 400 leaders showed a measure of economic confidence fell to minus 60 in June. That’s down from minus 45 in April and the lowest since the coronavirus first hit the UK in early 2020.

With consumer confidence already at a record low, the poll is the latest evidence that UK companies are also feeling the heat from soaring prices, adding to the risks of a recession later this year. A survey from Lloyds Banking Group Plc earlier this week also showed a marked reduction in optimism among businesses.

The most frequent reason for pessimism in the IOD report was inflation, which currently sits at a four-decade high, followed by Britain’s exit from the European Union. About six-in-ten said the economic outlook was weighing on their own firm’s prospects, while skills shortages and higher taxes were also cited as reasons for unease.

“Inflation is not only raising costs but is also raising concern about the macro-economy,” said Kitty Ussher, chief economist at the IOD. “Although many business leaders are still planning for growth, they see the external economic environment as working against them.”