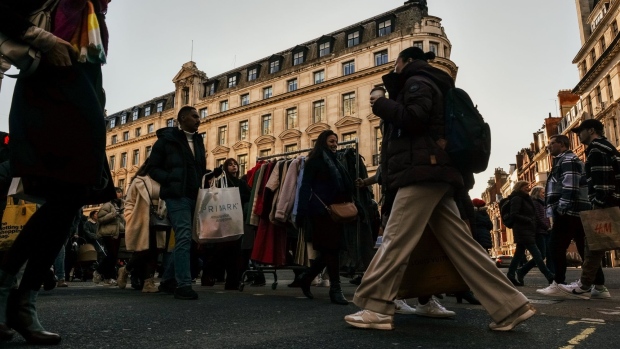 Shoppers cross a road junction on Regent Street in London, UK, on Thursday, Jan. 19, 2023. The Office for National Statistics are due to release the latest UK retail sales figures on Friday. Photographer: Jose Sarmento Matos/Bloomberg , Bloomberg

(Bloomberg) -- Business confidence in Britain has sunk to its lowest level since the global financial crisis, according to a survey of accountants, amid persistently high inflation and fears that the country is already in a recession.

The Institute of Chartered Accountants in England and Wales said Thursday that its latest monitor of business sentiment dropped to an index reading of -23.4, the weakest since 2009. The last survey, published in November, stood at -16.9.

Companies in the retail, property and manufacturing sectors were particularly downbeat and reported problems accessing capital, the group said. Construction firms had the lowest confidence.

Suren Thiru, the group’s economics director, blamed “the lethal combination of sky-high inflation and deteriorating customer demand,” and warned that “2023 is likely to be a bleak year for the economy as record inflation, rising taxes and interest rates push the UK into recession.”

The survey included 1,000 chartered accountants and was conducted between Oct. 17 and Dec. 16.

Its findings were echoed by a separate survey, also published Thursday, which found morale plummeting among small firms. The Federation of Small Businesses’ confidence index dropped to -46 points in the final quarter of 2022 from -36 in the third quarter.

The FSB said it’s now almost as low as during the UK’s second Covid lockdown. Its survey began in 2014.

According to the FSB, retail businesses were among the most pessimistic, along with hospitality firms like pubs and restaurants. More than 1,000 small firms were surveyed between Dec. 7 and Dec. 23.