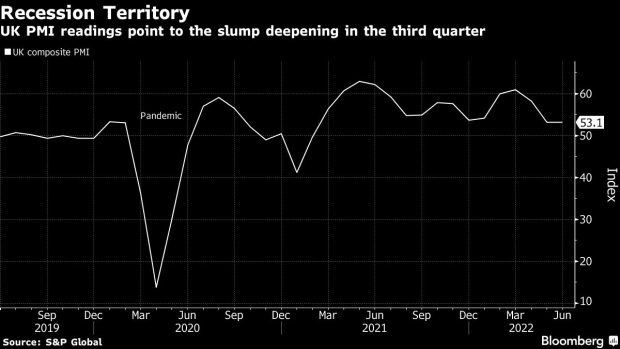 (Bloomberg) -- UK businesses are bracing for a deeper economic slump in the third quarter as inflation eats into profits and hits the spending power of consumers.

S&P Global said its purchasing manager index held at 53.1 in June while a gauge of new order volumes fell at the sharpest pace since the pandemic recovery started in March 2021. Companies reported rising pay pressures and increasing concerns about fuel and energy bills.

The findings add to headwinds facing the British economy, which is on course to shrink during the second quarter. With prices rising at the strongest pace in 40 years, the Bank of England has signaled a series of interest-rate increases ahead intended to take the heat out of inflation.

“The UK looks set for a troubling combination of recession and elevated inflation,” Chris Williamson, chief business economist at S&P Global Market Intelligence, said in a statement on Thursday. “The economy is starting to look like it’s running on empty.”

Services, which economists had expected to slow, held up June when compared with May. Manufacturing recorded its slowest growth since February 2021, with new orders dropping for a fourth month and at a sharper pace than in May.

S&P said companies accelerated the pace of hiring to fill vacancies, creating jobs at the fastest pace in three months. Wage pressures added to costs, and the overall inflation rate reported by companies was its second fastest on record.

“Business confidence has now slumped to a level which has in the past typically signaled an imminent recession,” Williamson said. “The weakness in the broad flow of economic data so far in the second quarter points to a drop in GDP, which the forward-looking PMI numbers suggest will gather momentum in the third quarter.”