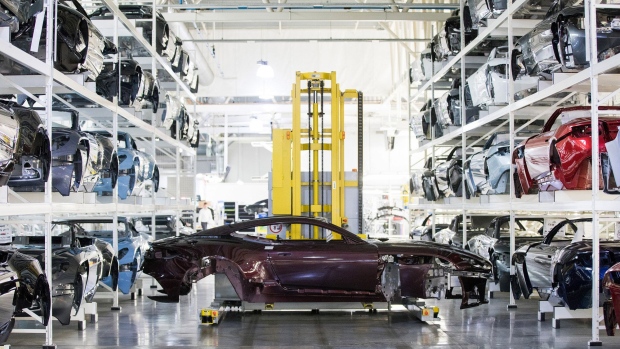 A robot on transports the body of an Aston Martin DBS Superleggera automobile on the production line at the Aston Martin Lagonda Ltd. manufacturing and assembly plant in Gaydon, U.K., on Tuesday, Sept. 4, 2018. Aston Martin is preparing to list its shares in London after the brand synonymous with U.K. spymaster James Bond pulled off a multi-year turnaround. , Bloomberg

(Bloomberg) -- UK light vehicle production will jump by about 15% next year as crippling shortages of semiconductors improve but the industry is unlikely to recover to pre-pandemic levels as energy costs and a lack of investment put a lid on the rebound.

The Society of Motor Manufacturers and Traders sees output rising to 984,000 next year, and to over a million by 2025, according to a statement Monday. That’s still a far cry from the 1.3 million cars produced in 2019.

The UK automotive industry, which counts Tata Motors Ltd.’s Jaguar Land Rover, Nissan Motor Co., and BMW AG as producers, is at risk of bungling the transition to electric cars after uncertainties around Brexit made investment tricky. Since then, a lack of a cohesive industrial strategy and now surging energy costs is dragging on the nation’s competitiveness.

We “need swift and decisive, action that addresses the immediate challenges and gives us a fighting chance of winning the global competition,” Mike Hawes, chief executive officer of the SMMT, said at the group’s annual dinner in London. “That window of opportunity is open but is closing fast.”

Read More: The UK Car Industry’s Prospects Are Going From Bad to Worse

Carmakers are also renewing their push for government support to help with soaring energy bills amid a cost of living crisis in the country. Energy costs in the UK are some 80% higher than the European Union average, the SMMT said, plunging smaller enterprises into crisis.