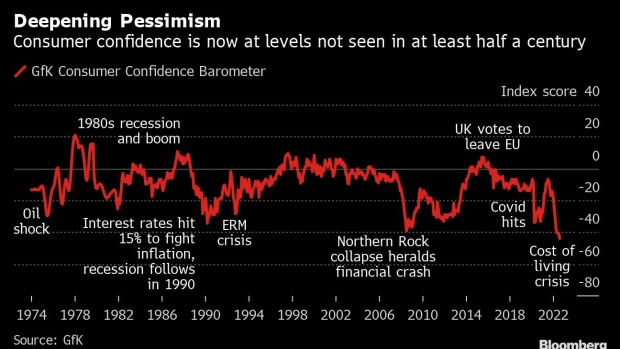 A customer passes between stalls at a street market in London, UK, on Tuesday, May 17, 2022. The Office for National Statistics will release U.K. CPI Inflation figures for April on Wednesday. , Bloomberg

(Bloomberg) -- UK consumer confidence fell to a record low as concerns about a recession increased and soaring inflation tightened a squeeze on household finances.

GfK said its gauge of confidence declined 3 points to minus 44 in August, the lowest since records started in 1974. All of its measures fell, with the outlook for personal finances declining the most.

“A sense of exasperation about the UK’s economy is the biggest driver of these findings,” said Joe Staton, client strategy director at GfK. “The crisis of confidence will only worsen with the darkening days of autumn and the colder months of winter.”

The figures reflect a year-long surge in inflation, which hit a four-decade high of 10.1% last month, driving up the cost of everything from food to energy and clothing. The Bank of England expects prices growth to top 13% in the coming months, sharpening the pain for consumers whose real wages are falling at a record pace.

“Consumers are either already struggling with rising costs or are fearing what’s looming on the horizon,” said Linda Ellett, head of consumer markets, retail and leisure at KPMG UK. “Those storm clouds are now fast closing in, with higher costs reducing the discretionary spending power.”

A separate survey of business output by Lloyds Bank Group Plc showed a drop across nine of the 14 industries tracked. The report showed 10 sectors saw a drop in demand, with tourism and recreation hit hardest.

“Inflationary pressure are currently depending activity and demand across the economy,” said Jeavon Lolay, Lloyd’s head of economics and market insights. “This includes a consumer-led slowdown, reflecting the fall in real incomes and ongoing supply constraints and staff shortages.”