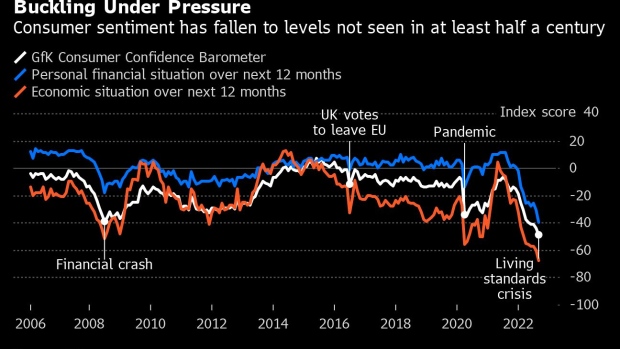 Price signs on a clothing market stall in Barking, UK, on Tuesday, Sept. 13, 2022. As the UK enters a period of public mourning after the death of Queen Elizabeth II, data releases are likely to show a temporary reprieve in inflation and a jump in wage growth. Photographer: Chris Ratcliffe/Bloomberg , Bloomberg

(Bloomberg) -- UK consumer confidence slumped to a new low in September as a tightening squeeze on living costs made people much more pessimistic about their own finances.

Market research firm GfK Ltd. said its measure of sentiment fell five points to minus 49, the lowest since it started the survey in 1974. Economists forecast a reading of minus 42.

With inflation close to 10% and energy bills set to rise again in October, household spending power is falling at its quickest pace in decades. Prime Minister Liz Truss’s government on Friday will set out measures to boost growth, starting with tax cuts for people and businesses.

“Consumers are buckling under the pressure of the UK’s growing cost-of-living crisis,” said Joe Staton, client strategy director at GfK. “They are asking themselves when and how the situation will improve.”