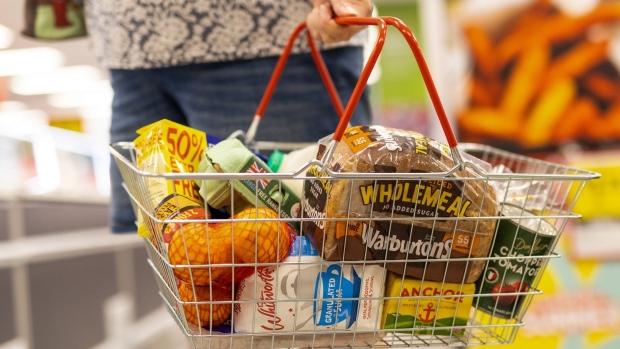 A basket of staple food items at an Iceland Foods Ltd. supermarket in Christchurch, UK, on Wednesday, June 15, 2022. "Britain's cost-of-living crisis -- on track to big the biggest squeeze since the mid-70s -- will continue to worsen before it starts to ease at some point next year," said Jack Leslie, senior economist at the Resolution Foundation, a research group campaigning against poverty. Photographer: Chris Ratcliffe/Bloomberg , Bloomberg

(Bloomberg) -- British consumers are starting to lose faith in the quality of food sold by UK supermarkets as they adapt their buying habits to cope with the highest inflation in four decades.

Trust in supermarkets fell 20% over the past year and almost a quarter of shoppers say they are buying lower-quality products to feed their families, according to a survey by Red Tractor, a product certification program. About 30% of shoppers are buying less meat and 13% are buying less fruit and vegetables.

The cost-of-living crisis is weighing on consumers, who are shopping more at discounters and shifting to store brands to save pennies. What’s more, the war in Ukraine has limited supplies of everything from sunflower oil to wheat, forcing supermarkets to use replacements like palm oil in their products. Record-breaking temperatures may further complicate food supplies.

“As people are forced to trade down into cheaper products, they lose confidence in the way the food is produced,” said Christine Tacon, the chair of Red Tractor, in an emailed statement.

Among recent moves, Iceland Foods has used sustainable palm oil in some products, making a u-turn on a previous pledge to remove the oil from its own-brand lines. Jo Whitfield, chief executive officer of supermarket chain Co-op Food, called on the government in May to tackle food security so that crisis events like the war don’t reduce supplies so much in the future.

Grocery price inflation has hit 9.9%, its second-highest level since Kantar started tracking the data in 2008. Earlier this year, Tesco Plc Chairman John Allan said that cash-strapped shoppers are asking the grocer’s checkout staff to stop when they hit £40 before putting the rest of their goods back on the shelves.

People are eating less nutritious food than they would like and an increasing number are skipping meals, often to make sure their children can eat, said James Walton, chief economist at the Institute of Grocery Distribution.

“That is a clear sign of food stress,” he said. “Those who are at the bottom end of the income scale allocate a much higher proportion of their income to food, so they are going to be hit hardest.”

Brexit is also affecting Britons’ perception of food standards. More than a quarter of consumers feel quality has slipped over the past two years and 43% say that new trade deals, such as those with the US and India, will reduce standards further, according to the report.

The Trust in Food Index, commissioned by Red Tractor and polling firm YouGov, surveyed more than 35,000 adults from across the UK. Red Tractor develops standards for food products followed by supermarkets, household brands and restaurant chains. Other certification programs include British Lion and Fair Trade.