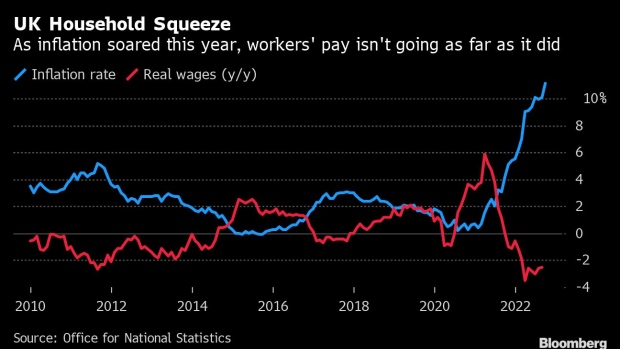 (Bloomberg) -- For the last two years, Covid muted Christmas celebrations across the UK, with people avoiding social situations or stuck into isolation through illness. This year’s menace is soaring inflation, which has forced many households to reassess their spending for the holidays.

2022 has been dominated by the cost-of-living crisis, and the figures are staggering. Inflation is running at a double-digit pace, the highest in 40 years and far outpacing wage growth. Food prices are up almost 20%, the cost of heating a typical home has jumped more than 150%.

After months of grappling with a savage squeeze on their finances, many families are downscaling their festive plans. Some are giving fewer presents or spending less on decorations, others are grouping with other households to save on food costs or asking visitors to help pay for the Christmas meal.

Serena McCarthy, 44, a charity worker based in Coventry, is among those taking steps to save money. She’s clubbing together with her family and two other groups to share the cost of the Christmas dinner.

“So instead of three turkeys, there’ll be one,” she said.

This isn’t a case of the bah humbugs. It’s a practical decision given the cost of cooking a turkey for three hours in an electric oven has surged 62%. The price of the turkey itself has risen about 19% over the past year due to higher feed costs and an outbreak of bird flu. According to analytics firm Kantar, the overall cost of the traditional Christmas dinner has increased 9%.

Meanwhile, heating a home with gas central heating for six hours while the family gathers costs £6.76, according to a Bloomberg analysis. That’s up from £2.63 last year.

And McCarthy’s changes don’t stop there. Her family has also decided to draw names when it comes to giving presents, cutting the number of gifts each person has to buy, and is cancelling its annual family outing to the theater. While she usually stays at a hotel when she visits her family in Hertfordshire over the period, this time she’s coming back in the evening. She’s hoping that altogether, they can cut back by at least £150.

McCarthy’s move to simplify and downsize Christmas will be replicated by many others across the country.

In total, UK households may reduce their holiday spending by more than £5 billion, according to a survey published this week by price comparison website Uswitch. The top areas for cuts are presents, food and alcohol, and socializing.

Such restraint weighed on Black Friday late last month, usually an opportunity for shoppers to buy discount Christmas presents. At East London’s Westfield shopping center, one of the biggest retail malls in the UK, many people there that afternoon were doing more browsing than buying, while some of those who were getting gifts were travelling in from outside the country.

“This doesn’t seem like Christmas shopping,” said Harry Towner, 26, who lives in East London and was in the mall that day to accompany his family visiting from Lincolnshire. “This is nothing like it used to be.”

That mood was mirrored across the country. Despite Christmas sales starting earlier in shops, footfall on Black Friday was 17% lower this year than before the pandemic.

Anyone looking at the economic backdrop shouldn’t be surprised. Inflation is eroding wages, and the spending power of UK households is falling at the fastest pace in years. Consumer confidence is near a record low and people are more worried about their personal finances than they were during the financial crisis and Covid lockdowns.

As the inflation crisis has mounted, food banks and front-line services have seen demand surge, with some at risk of collapse under the weight. Many are already looking ahead to 2023 to work out how to handle the sheer volumes of people.

Homeless charity Crisis is extending the amount of time they’re giving accommodation for some people for the second year in a row in their annual Christmas service, and are encouraging people to keep volunteering after the usual increase during the festive season.

In North London, the Arc Centre food bank is also doing its annual request for donations of “luxury items” which are collected during the 12 days in the run up to Christmas. That list included sugar and washing up liquid. “For our clients now it's going to be so much more difficult now to buy those things,” said Brenda Kelly, who co-ordinates the food bank. “But they’re really needed.”

It’s the rising number of people requesting help that’s worrying her most as the end of the year draws closer.

“Come January, I just don’t know what we’re going to do with our waiting list,” she said. “It just keeps growing, and will continue to do so.”

--With assistance from Liza Tetley, Katie Linsell and Todd Gillespie.