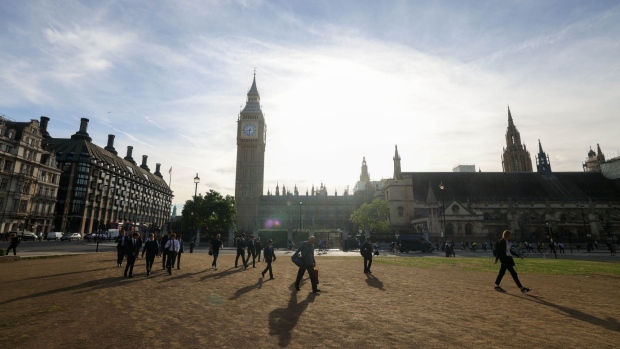 Morning commuters cross Parliament Square near the Houses of Parliament on the day of the announcement of the new leader of the ruling Conservative Party in London, UK, on Monday, Sept. 5, 2022. The UK will finally find out Boris Johnson’s successor as prime minister on Monday, after a bitter Conservative Party contest between Foreign Secretary Liz Truss and former Chancellor of the Exchequer Rishi Sunak. Photographer: Chris Ratcliffe/Bloomberg , Bloomberg

The UK’s bonds are facing renewed pressure as market players see a record supply of debt coming in the next fiscal year.

The country’s Debt Management Office projected gross financing for 2023-2024 will increase almost 50% to £305 billion ($360 billion). That led investors to dump bonds Thursday as it suggests net supply at an all-time high, according to RBC Capital Markets and HSBC Holdings Plc.

The figures cast a shadow over the new government’s efforts to return to fiscal discipline, including reduced bond sales this year, following a market meltdown triggered by the former administration’s plans for vast unfunded tax cuts. The headwinds are particularly acute now that the Bank of England is selling gilts, rather than buying, as it moves to reverse years of monetary stimulus.

“From 2023/2024 the number of gilts coming to market is eye watering,” said James Lynch, fixed income investment manager at Aegon Asset Management. “Yet again in 2023 we will be talking about the market’s ability to absorb a large amount of gilt issuance.”

The market’s moves signal a rally on the prospect of tighter fiscal policy may have run out of steam. The 10-year yield is still down about one and half percentage points from a high in October after investors piled back into UK bonds, following turmoil that cost both the chancellor and prime minister their jobs.

For the next fiscal year, net gilt issuance will be the highest on record at £255 billion, according to RBC Capital Markets estimates, once BOE purchases and sales are accounted for. That’s “almost double” the previous high in the fiscal year ended 2011, analysts including Cathal Kennedy wrote in a note to clients.

Moody’s expects government debt will remain “consistently” above 100% of GDP in the coming years, according to Evan Wohlmann, a senior credit officer at the firm.

While the government raised its long-term financing projections, it moved to rein in borrowing in the short term. The nation’s debt office now plans to sell £169.5 billion of bonds in the current fiscal year to April, down £24.4 billion from its September forecast and below the £185 billion estimate in a Bloomberg survey of banks.

Shorter-dated bond maturities declined the most as their share of sales was revised higher by the DMO. That narrowed the spread between two- and 30-year yields by as much as 10 basis points to 21 basis points, the lowest since October.

“The government is gaining some credibility in the near term with the remit reduction this fiscal year, and is promising to get the public finances in line with fiscal rules in five years’ time,” said Aaron Rock, investment director at abrdn. Still, he pointed to a “paradigm shift” in the UK’s issuance compared to recent years.

New Chancellor of the Exchequer Jeremy Hunt is trying to balance the books, having lifted taxes and cut spending in his announcement Thursday. That will impose further pain on consumers and businesses, already enduring the early stages of a recession.

The Office for Budget Responsibility cut its growth forecast to 1.4% in 2023 from 1.8% previously. It sees inflation falling only marginally to 9.1% this year and 7.4% next year.

“The government will still find itself walking a tricky path going forward to keep the markets on-side and avoid a repeat of crises like we saw in the gilt market last month,” said Stuart Cole, head macro economist at Equiti Capital. “It is by no means certain that the measures announced today will not simply deepen the recession.”

The announcements coincided with comments from BOE Chief Economist Huw Pill, who said policy makers can’t let the current spike in inflation become a long-term problem for the economy, and that more tightening can be expected to get it under control.

The market is pricing a 40% chance of a 75 basis points hike by the BOE in December, roughly in line with where it was prior to the statement yet well below the one full point expected a month ago.

“All we need now is for the Bank of England to disappoint on rates and sterling will begin to trade lower,” said Peter Kinsella, global head of FX and rates strategy at Union Bancaire Privee Ubp SA.

Sterling traded down 0.7% down at $1.1838 by 6 p.m. UK time, having fallen over 1% earlier. The currency’s moves were compounded by hawkish comments from Federal Reserve Bank of St. Louis President James Bullard, who urged policy makers to raise interest rates further, driving the dollar higher against major peers.

“The UK’s prospects look challenging over the next 18 months and we expect the pound to reflect that,” said Neil Mehta, portfolio manager at BlueBay Asset Management.