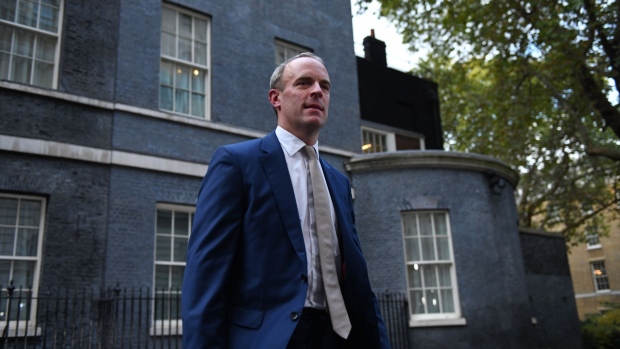 Dominic Raab, UK lawmaker, leaves 10 Downing Street after his appointment as UK deputy prime minister and justice secretary, in London, UK, on Tuesday, Oct. 25, 2022. "Right now our country is facing a profound economic crisis" Rishi Sunak said shortly after becoming the first person of color to lead the British government and its youngest premier in more than two centuries. , Bloomberg

An investigation into UK Deputy Prime Minister Dominic Raab has been widened to cover a third formal complaint into his behavior, the government said.

The complaint relates to Raab’s tenure at the former Department for Exiting the European Union, Prime Minister Rishi Sunak’s spokeswoman Camilla Marshall told reporters on Friday. It was received by the Cabinet Office on Wednesday, she said.

Adam Tolley, an employment law specialist leading the probe into bullying allegations against Raab, has been asked by Sunak to consider the latest complaint as part of the investigation, Marshall said.

The other two complaints against Raab were lodged last week but date from his previous tenure as justice secretary and his time as foreign secretary. The deputy premier has denied all bullying allegations made against him, while vowing to “cooperate fully” with any probe and respect its outcome.