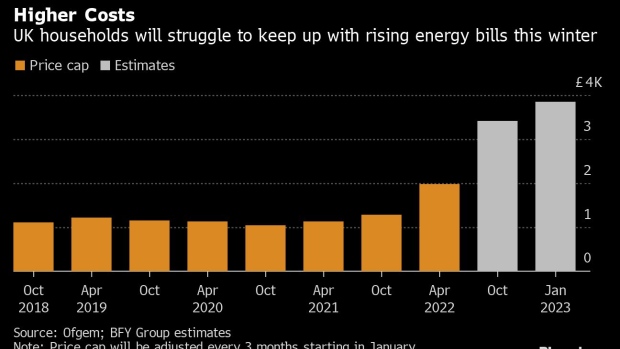 Average bills for January alone are likely to be above £500 ($603), more than three times last year’s level, according to analysis from BFY Group Ltd.

“Huge swathes of the British public aren’t going to be able to afford their bills this winter,” said BFY senior consultant Gemma Berwick. “Average families with two working parents will be in fuel poverty.”

Russia is curbing flows on the Nord Stream pipeline to Germany -- Russia’s main gas link to the European Union -- citing maintenance issues with turbines. That’s sent energy costs soaring, with countries in the region racing to stockpile fuel for the winter and limit further economic damage from the crisis.

The cut in gas flows through Nord Stream is set to push up the UK’s energy price cap -- the maximum utilities can charge consumers -- to £3,420 in the fourth quarter of the year, according to BFY. That amount would then rise to £3,850 in the first quarter of 2023, it said. That’s even higher than recent analysis from Cornwall Insight Ltd., released before the latest increase in gas prices.

While Britain has said it’s weaned itself off Russian gas, its market and supplies are closely tied to the continent and major gas producer Norway. The UK has multiple gas terminals, but lacks sufficient storage facilities of its own. As a result, it exports the fuel to continental Europe in the summer. It can then import during the energy-intensive winter months.

The surge in costs will be an early test for whoever is Britain’s next prime minister. Candidates have been tussling over who will better manage the economy and inflation, but they’re essentially powerless to tame international commodities markets.

The energy industry has already flagged that current measures to help households this winter will likely be inadequate. A parliamentary committee this week determined that the government needs to provide more relief to consumers in the coming months.