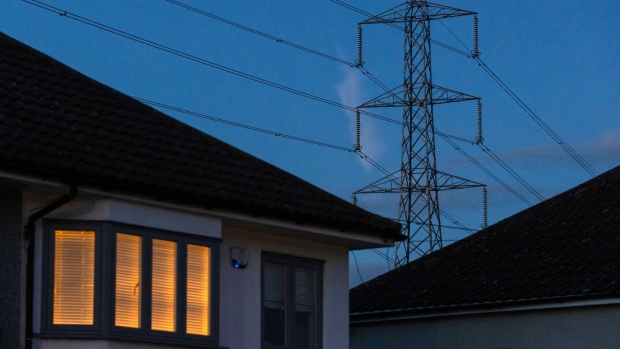 A light on at a residential home near an electricity transmission tower in Upminster, UK, on Monday, July 4, 2022. The UK is set to water down one of its key climate change policies as it battles soaring energy prices that have contributed to a cost-of-living crisis for millions of consumers. Photographer: Chris Ratcliffe/Bloomberg , Bloomberg

(Bloomberg) -- UK households are already a record £1.3 billion in debt to their energy suppliers ahead of winter, when bills are set to surge yet again.

Consumers typically build up credit with their providers during the summer -- when energy usage eases -- limiting the shock of higher demand in the winter. But soaring gas and power prices have made this summer expensive and fueled warnings of an even bigger crisis in the coming colder months.

Household energy debts as of July were more than double September’s level, according to price-comparison service Uswitch.com. Each year since 2018, when a UK price cap was introduced, household debts have gradually fallen during summer. But this year, debt increased by 10% between April and July.

“Energy debt has hit an all-time high with the worst possible timing, turning this winter’s energy price hike into a deeply precarious situation for many households,” said Justina Miltienyte, head of policy at Uswitch.com. “The cost-of-living crisis is already squeezing budgets dramatically, even during the summer months, as families struggle with rising bills in all areas.”

British energy suppliers earlier this year warned lawmakers about the huge number of customers falling behind on bills, and that the crisis will get beyond what any of them could handle. British wholesale gas prices have more than doubled since then, setting the stage for millions more to struggle to pay bills this winter.

Some 6.5 million households owe an average £206 to providers, Uswitch.com said in a report Wednesday. The number of those in credit has fallen to 9 million from 11 million in April.

While regulation has shielded consumers from some of the price spike, that’s set to change in October when the energy price cap is next adjusted. Analysis from Cornwall Insight Ltd. has projected average annual bills to jump more than 80% when the cap is next revised and climb further again early next year.