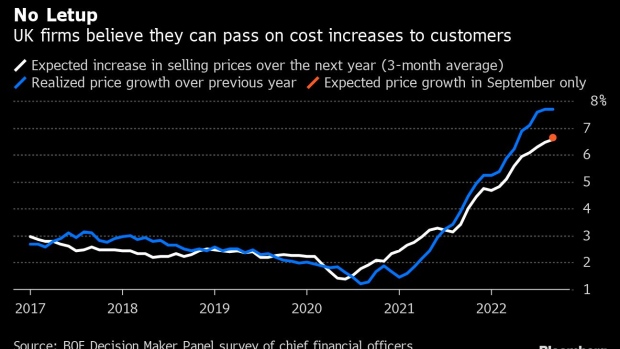 (Bloomberg) -- Price pressures in the UK economy showed no signs of abating in September, with executives predicting inflation will remain above the Bank of England target for years.

Chief financial officers polled for the central bank said they expect consumer-price inflation to be running at 9.5% a year from now -- only slightly below the current rate of 9.9%. In three years, inflation is expected to be 4.8%, still more than double the 2% target.

The figures published Thursday suggest the BOE has work to do convince businesses and households that it is getting a grip on the highest inflation in four decades.

The BOE has raised interest rates seven times since December in an effort to avert a wage-price spiral. However, the task has been made harder by Prime Minister Liz Truss’s government announcing tens of billions of pounds of unfunded tax cuts. Money markets are now pricing in a BOE benchmark rate of 5.75% by May next year -- more than double the current level.

Companies are raising their own prices to protect their profit margins. Questioned last month, they expected to increase prices by almost 6.7% in the next year, the joint highest figure since the Decision Maker Panel survey began at the start of 2017.

Recruitment difficulties remained widespread, with 84% of firms reporting they were finding it hard to recruit people compared to normal.

The tightness of the labor market is giving workers bargaining power and driving up expenses for companies. Firms expect wages to rise 5.9% in the coming year, while the cost of producing each unit of output is expected to surge 9.1%.