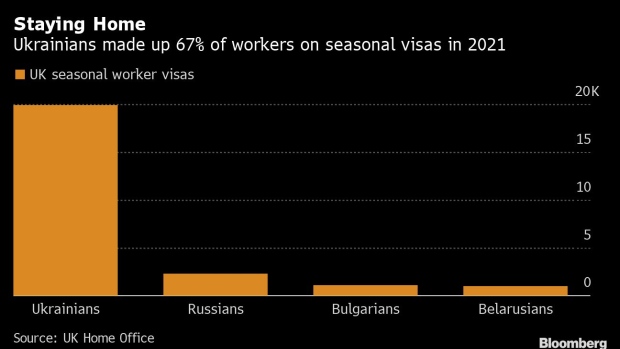 A farm worker picks strawberries in a poly tunnel at a farm in Milford, Surrey, U.K. on Monday, July. 6, 2020. , Bloomberg

(Bloomberg) -- Garnik Kazarian, a 31-year-old from Moscow, spent almost three months last year picking strawberries on a farm in Scotland. His hopes to return to the UK this season were dashed when a recruitment firm canceled the sponsorship certificate he needed to get a visa.

“It was really disappointing,” said Kazarian, who estimates he spent a total of £1,200 ($1,477) on the application and traveling to interviews for himself and his girlfriend.

While Russians are officially still welcome in the UK, long waits for visas and uncertainty over the geopolitical situation are making some recruiters wary of hiring. That’s compounding a shortage of seasonal farm workers, which had already worsened in the wake of Brexit.

Not only are farms being forced to replace Ukrainians -- who are staying home to fight after last year accounting for two-thirds of seasonal workers -- but some recruitment firms are blocking hires from Russia, the No. 2 labor supplier.

It’s another sign of how sanctions intended to punish Russia are having unintended consequences, exacerbating food inflation and insecurity. Farmers face the burden of training inexperienced workers from further afield, with the risk of spillover into the UK’s cost-of-living crisis.

The official line belies the realities in the recruitment market.

“The seasonal worker scheme is open to all nationalities, so it is wrong to claim someone would be refused due to their nationality,” a spokesperson for the UK Home Office said.

Still, three of the providers who secure workers for the UK’s seasonal worker program appear to be shunning applicants from Russia. The fourth provider said it’s still recruiting but that the process has slowed.

Zoloterra Ltd., which works with Concordia Ltd. says on its website its hiring program is “working as usual for citizens of the commonwealth of independent states (apart from Russia and Belarus).”

The UK government is releasing 10,000 additional visas under the seasonal worker visa route this year, making a total of 40,000 available.

Peyman Zonouzi, a London-based Immigration lawyer at Armazi, said that he was in touch with about 140 Russians who had been been refused visas, but that he expected the total number impacted was much higher. Crucially, recruiters were withdrawing certificates of sponsorship -- that allow Russians to apply for visas -- while their valid applications were pending with the Home Office, he said.

Those certificates were being withdrawn due to “an unfavorable political/economic backdrop which has made the processing of visas for Russian citizens very difficult,” according to emails from AG Recruitment and Management Ltd. staff to applicants that were seen by Bloomberg.

In an automatic email reply, a third recruiter Pro-Force wrote that it is only recruiting people resident in Ukraine, Tajikistan, Uzbekistan, Kyrgyzstan, Nepal, North Macedonia and Turkey.

The fourth recruitment firm, Fruitful Jobs, said it’s still recruiting Russians but the process has slowed due to lack of ways to pay staff, the cost of applications and travel restrictions.

Against that backdrop, half of UK food growers and manufacturers expect to struggle recruiting lower-skilled seasonal workers in the next six months, according to a survey by the Association of Labor Providers.

Laborers from the poorest nations are being “treated as if they were completely disposable,” said Dora-Olivia Vicol, chief executive officer of London-based charity Work Rights Centre.