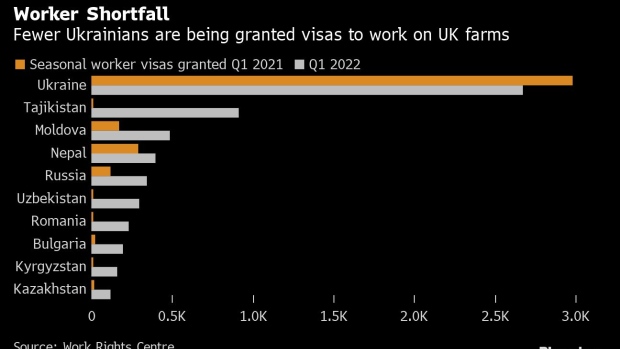 Fruit pickers make their way towards an orchard to pick apples during a harvest at a farm in Coxheath, U.K., on Thursday, Sept. 16, 2021. The head of the U.K.'s biggest business lobby criticized the government over labor shortages that are disrupting supply chains, warning they could last for as long as two years and harm the post-pandemic recovery. , Bloomberg

(Bloomberg) -- Russia’s invasion of Ukraine is choking off a vital supply of labor for the UK’s apple, strawberry and raspberry farmers, forcing them to recruit migrant workers from nations where the risks of exploitation may be greater.

Ukrainians received about 67% of Britain’s 30,000 seasonal visas for farm work last year, but that percentage is falling as the government in Kyiv enlists people to fight in the war. With crops ripening, British growers are turning to countries such as Tajikistan, Moldova and Nepal to make up the difference, but that may not be as simple as it sounds, according to a report by London-based charity Work Rights Centre.

“New markets come with new risks, including the risk that workers are charged illegal recruitment fees from local operators, and that they don’t yet know or trust the labor enforcement ecosystem in the UK, so these abuses remain unreported,” said Dora-Olivia Vicol, the group’s chief executive officer.

The Work Rights Centre recommends that recruiters and the industry do more research on the new markets, hire frontline workers who can speak the native language, and make it clear to applicants that they can report abuses -- and not just crimes -- to enforcement agencies.

At the same time,  the UK is short about 1 million workers when compared with pre-pandemic levels, and employers are advertising more job vacancies than there are people looking.

Half of UK food growers and manufacturers expect to struggle recruiting lower-skilled seasonal workers in the next six months, according to a survey by the Association of Labour Providers.

British Apples and Pears Executive Chairman Ali Capper expected 60% of her workforce this season to be Ukrainian, but now it’s more likely to be around 10%. That will hurt productivity since it takes time to train new workers, she said.

“That means it costs more per kilo to pick, and when you’re facing all the inflation that we’re facing, that’s pretty unhelpful,” Capper said.

The government said it will issue another 10,000 seasonal-worker visas, raising the total to 40,000 for food businesses. Farmhands can stay for as many as six months and transfer to other growers as harvests dictate.

“We will always back our farmers and growers and ensure that they have the support and workforce that they need,” a government spokesperson said.

But Capper said that’s still not enough for growers. Her harvest is in September, and she’s having trouble finding the 70 workers she needs for her Worcestershire farm.

The same goes for strawberry and raspberry farmers, said Nick Marston, chairman of the British Berry Growers. He said operators are increasing recruitment from countries including Romania and Bulgaria, but their plans may by stymied by a 25% increase in costs, attributed to higher packaging, transportation and fertilizer bills.

“Less experienced recruits will reduce the productivity of our workforce,” he said. “These labor challenges come on top of mounting production costs for berry growers.”