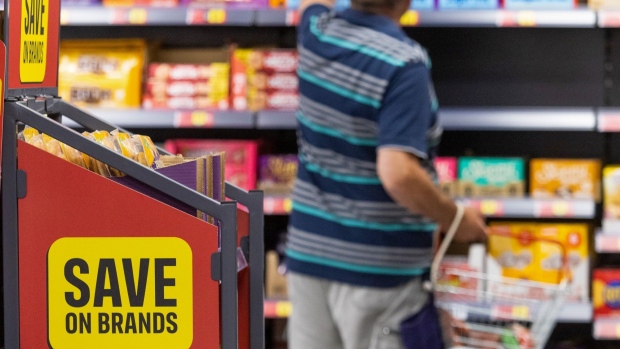 A promotional stand at an Iceland Foods Ltd. supermarket in Christchurch, UK, on Wednesday, June 15, 2022. "Britain's cost-of-living crisis -- on track to big the biggest squeeze since the mid-70s -- will continue to worsen before it starts to ease at some point next year," said Jack Leslie, senior economist at the Resolution Foundation, a research group campaigning against poverty. , Bloomberg

(Bloomberg) -- Inflation pressures in the UK economy showed only limited signs of abating in November, with companies expecting to raise prices by 5.7% in the coming 12 months.

Chief financial officers surveyed for the Bank of England also said they expect consumer prices to be growing at an annual rate of 7.2% a year from now and 3.9% in three years, almost double the 2% target.

The Decision Maker Panel data published Thursday point to further BOE rate increases in the coming months as officials battle to prevent the highest inflation in four decades from becoming entrenched. The current inflation rate is 11.1%.

As series of policy makers have pointed to the risk in recent days. On Wednesday, BOE Chief Economist Huw Pill cited corporate pricing power along with the strength of wage growth as reasons for vigilance.

Price-increase expectations eased only slightly from 6.2% in October. The average for the three months through November was 6.2%, down from 6.4% the previous month.

The BOE has raised interest rates eight times over the past year to 3% in an effort to avert a wage-price spiral. Money markets expect the cost of the borrowing to hit 4.7% by the summer of 2023, close to levels prevailing before the 2008 financial crisis.

A shortage of labor is giving British workers rare bargaining power and driving up expenses for companies. Firms expect wages to rise 5.8% in the coming year, double their pre-pandemic average, according to the BOE survey. The cost of producing each unit of output is expected to jump 8.6%.

Recruitment difficulties nonetheless showed signs of easing, with 78% of firms saying they were finding it hard to find new employees compared with normal. That’s the lowest in at least a year.

Around 60% reported higher levels of business uncertainty, and firms expect higher interest rates to have a damaging impact on investment and employment.

The average effective rate on all borrowing was reported to have increased by 1.3 percentage points since the end of 2021. Respondents expect a further 1 percentage point over the year ahead.

The survey was conducted between Nov. 4 and Nov. 18 November and received 2,601 responses.