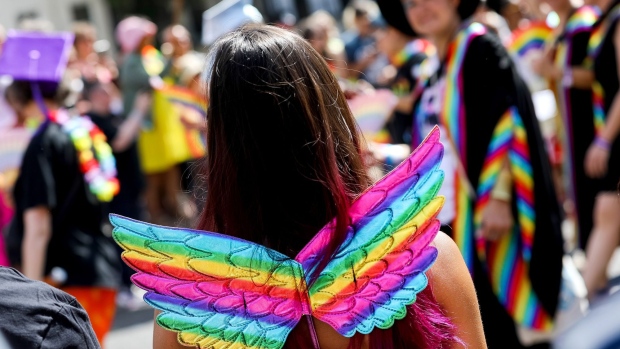 (Bloomberg) -- Young people across England and Wales are more than twice as likely to identify as LGB+ minority as the rest of the population, according to UK 2021 census data that for the first time reveal the makeup of sexual orientation.

Around 6.9% of 16 to 24 year-olds, who form part of the Gen Z demographic, consider themselves within the group. That compares with about 3.2% across all age groups, according to data released by the Office for National Statistics on Wednesday.

People in England and Wales aged 16 and older were asked about sexual and gender identity for the first time in more than 200 years of gathering data. One and a half million people said they identified as lesbian, gay, bisexual or another sexual orientation minority.

The numbers show that young people are more likely to see themselves as LGB+ than older generations. The same age group also accounted for a higher proportion of people who were trans, with 1% of people aged 16 to 24 saying their gender identity was different from their sex registered at birth.

The areas with the highest proportion of LGB+ young people were Ceredigion in Wales and Brighton and Hove.