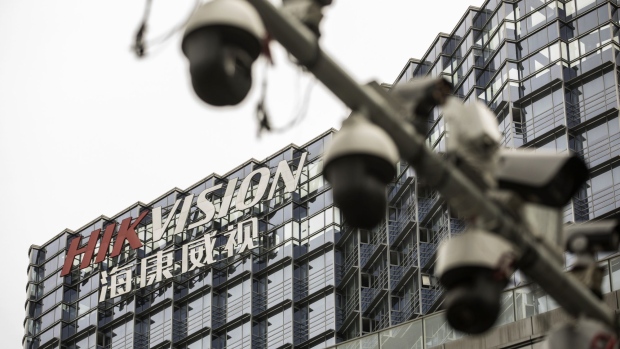 (Bloomberg) -- The UK’s Health Security Agency has been using video surveillance technology from under-fire Chinese firm Hangzhou Hikvision Digital Technology Co. at laboratories that conduct research into vaccines and deadly diseases, according to people familiar with the matter.

The UKHSA is based at Porton Down, a UK science hub in rural England that is home to two key government agencies focusing on defense and health, as well as other labs working in sensitive areas such as vaccine testing. In 2018, scientists at the Defence Science and Technology Laboratory -- run by the Ministry of Defence -- helped identify the nerve agent that left a former Russian double agent, Sergei Skripal, and his daughter Yulia hospitalized in critical condition.

The Health Security Agency, which is not part of the Ministry of Defence, has been using an unknown amount of Hikvision technology, the people said, asking not to be named discussing confidential information. The equipment was in place as recently as February and it is not known whether it is still there.

The UKHSA declined to comment on security matters. A Ministry of Defence spokesperson said there are robust security measures in place at Porton Down but the ministry does not comment on specific arrangements.

A Hikvision spokesperson said they were unable to confirm details of the installation as the company did not sell directly to end users in UK and other overseas markets. “The company has been engaging with governments globally to clarify misunderstandings about the company, our business, and address their concerns,” the spokesperson said in a statement.

Founded in 2001 with help from a state-owned electronics research institute in Hangzhou, Hikvision quickly grew into one of the world’s largest makers of surveillance equipment. Its cameras are used in cities around the world, from London to Bangkok, in part thanks to its offering of cheap and capable devices. It has become a major supplier in the UK to government agencies and universities.

While the company has not been accused of any wrongdoing in the UK, Health Secretary Sajid Javid has reportedly banned Hikvision from competing for new Department of Health contracts on ethical grounds. The government has yet to reach a common position on the company, one of the people said.

A Department of Health and Social Care spokesperson said the department did not comment on security procedures. “We take the security of our personnel, systems and establishments very seriously and have robust measures in place,” the spokesperson said.

The government declined last year to support a recommendation by the Foreign Affairs Committee to ban Hikvision and fellow camera maker Dahua Technology Co. from the UK.

In the US, Hikvision has faced greater scrutiny. In 2019, it was among others placed on a blacklist by the Trump administration over alleged human-rights violations by China against Muslim minorities in the far-Western region of Xinjiang. The Biden administration is considering sanctioning the company.

The UK defense ministry’s current guidance seems to suggest “not to use/install Hikvision equipment,” according to a recent freedom of information request from a human rights activist organization.

The installation of Hikvision cameras at Porton Down illustrated “the shape and size of the problem,” said Sampson in an interview on Wednesday. “We don’t know what aspects of government and public life are being watched by these cameras and it reinforces my view that we need to have a clear understanding of what systems are in place.”

Hikvision has attracted criticism for supplying surveillance cameras and facial-recognition technology that has helped Chinese authorities roll out “safe city” initiatives in Xinjiang, where ethnic Uyghurs have faced persecution.

The UK parliament’s foreign affairs committee said in a report published last year that Hikvision’s cameras “have been deployed throughout Xinjiang, and provide the primary camera technology used in the internment camps.” Beijing denies that Uyghurs are held in internment camps.

Cybersecurity concerns about Hikvision largely stem from the company’s association with the Chinese government. According to Hikvision’s financial records, its controlling shareholder is a Chinese government-owned entity, China Electronics Technology HIK Group.

Last year, a researcher known as Watchful IP discovered a security flaw affecting millions of Hikvision cameras that could have enabled hackers to covertly access video feeds. However, the researcher concluded the Chinese government had not deliberately inserted the flaw as a “back door” for espionage on the grounds that a government “wouldn’t do it like this.”