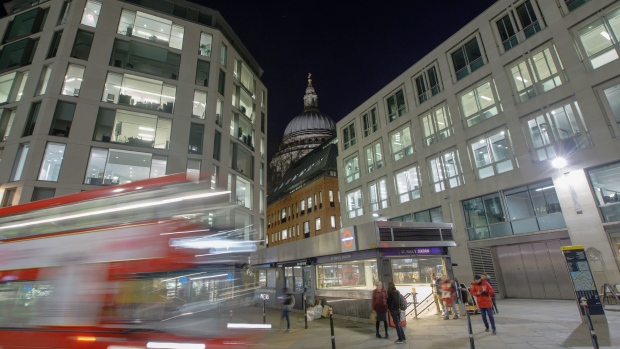 A bus passes St Paul's London Underground station at dusk in the City of London, U.K., on Monday, March 16, 2020. While the U.K. authorities have abandoned efforts to contain the coronavirus, focusing on delaying the worst of the outbreak, financial-services companies are grappling with policy as several offices cope with health scares. Photographer: Luke MacGregor/Bloomberg , Bloomberg

The days after Monday’s funeral of Queen Elizabeth II are set to be marked by a flurry of activity from the UK’s finance and business ministries as the new government announces measures aimed at capping energy prices and boosting economic growth.

British Business Secretary Jacob Rees-Mogg is expected on Wednesday to set out the details of legislation that will help companies deal with soaring energy costs, while Friday is likely to bring an emergency budget from new Chancellor Kwasi Kwarteng, the Times of London reported.

Kwarteng and Rees-Mogg are together expected to announce tens of billions of pounds in tax cuts combined with billions more in energy support measures designed to stave off a recession and to buffer British households and businesses from soaring energy prices during the winter.

Prime Minister Liz Truss made cutting taxes to boost economic growth the centerpiece for her winning campaign for the leadership of the Conservative Party. She was chosen to lead the Tories earlier this month after the resignation of Boris Johnson in July.

The Times of London reported that Kwarteng is reviewing the UK government’s fiscal rules ahead of the announcement next week of £30 billion ($34.3 billion) of tax cuts, which would presage further measures in a full budget plan in November. The planned tax cuts could breach current fiscal rules that require the government to reduce the debt as a percentage of economic output, the paper said.

Kwarteng is also drawing up plans for a blanket discount on business energy bills, The Daily Telegraph reported. Under the program, businesses could receive a fixed reduction to the rate they pay per kilowatt hour, the paper reported.

A spokesman for the Department for Business, Energy and Industrial Strategy declined to comment on the reports.

Truss has already said her government will provide a support package for household energy bills that will cap their energy costs at £2,500 for an average annual bill with the difference between the capped price and the market price covered by a taxpayer-funded subsidy to energy companies.