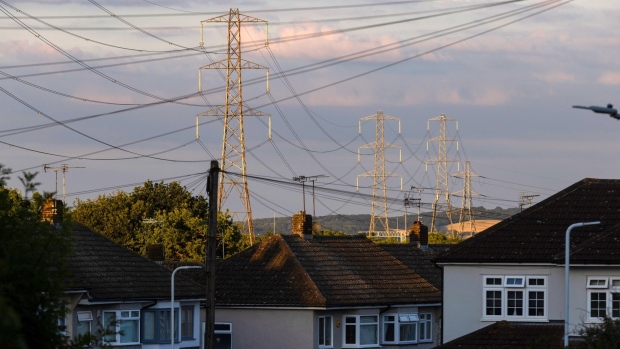 (Bloomberg) -- The U.K.’s electricity network operator issued a warning that its supply buffer will narrow this evening forcing a move to limit exports to neighboring countries.

While National Grid said it was confident that power margins would be sufficient, the measure was narrow enough to trigger the automatic alert for 6 p.m. to the market. The warning was later canceled but it shows the extreme stress Europe’s power market is under this summer as French nuclear plants are mostly shut for maintenance at the same time as heat waves and drought sap hydropower supplies.

“The system is short on power,” Phil Hewitt, director at Enappsys Ltd said. “Currently there is no major generation left to run in GB. It is either all running or on outage.”

This means that the only option for National Grid is to reverse interconnector flows back into the UK, he said. There has been as much as 4 gigawatts being imported at times this morning to solve the power shortfall.

Interconnectors could become controversial this winter as countries try to shore up domestic supplies with Russia cutting flows of gas to the continent. Norway, a major exporter to the UK, has already said it’s looking to limit exports when hydro reservoirs are low. France, usually a major exporter to Europe, has flipped to being a net importer putting pressure on surrounding markets.

Day-ahead power prices for Friday in the UK rose 17% to £336.20 a megawatt hour, more than six times the seasonal average over the past five years. Some intraday prices were even higher Thursday, with power on the Epex Spot exchange reaching as high as £603.37 a megawatt hour from 7:30 p.m. to 8 p.m.

In France, average intraday prices were as high as 750.36 euros a megawatt-hour this evening. Higher prices would ordinarily mean the UK sending exports but today there isn’t enough spare.

The UK is in the middle of a heat wave that’s driving demand for cooling. At the same time, a high pressure system is helping to limit winds, leaving the country’s fleet of wind turbines producing little electricity. The same conditions are moving through Europe with France enduring a third heat wave and the worst drought on record.

National Grid said in its early winter outlook report that it expects to make more warnings like these to try to keep the market balanced when demand rises.