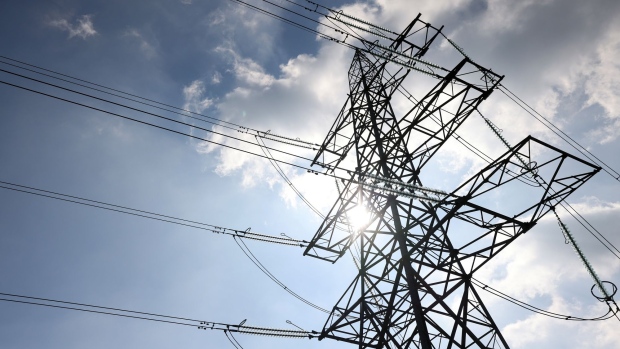 An electricity pylon near the Sellindge Convertor Station, operated by National Grid Plc, following a fire at the IFA interconnector site, in Sellindge, U.K., on Thursday, Sept. 16, 2021. Winter blackouts are now a real possibility after the fire took out a key cable that ships electricity to the U.K. from France. Photographer: Chris Ratcliffe/Bloomberg , Bloomberg

(Bloomberg) -- The UK’s National Grid Plc has learned how to get the British network up and running after a blackout by using green power.

The process, known as a black start, is a precautionary measure in the highly unlikely event that the whole grid shuts down. While it’s never been needed, a trial in Scotland with a hydro generator and wind turbines proved that it can be done without using gas or coal plants, National Grid ESO said in a statement.

Green power is becoming increasingly important in the nation’s energy mix, and the UK has become a leader in offshore wind because of the blustery weather off its long coastline.

Currently, some coal- and gas-fired stations are always kept on standby should a national power outage occur and a restart is required. Using renewables would mean there’s less need to pay utilities to keep fossil-fuel plants warm. It would also incentivize more renewable plants by funding them to be on standby.

“We have one of the world’s most reliable electricity networks, but our role is to be prepared for the most extraordinary of scenarios, including a nationwide power outage,” said Julian Leslie, head of networks at National Grid ESO.