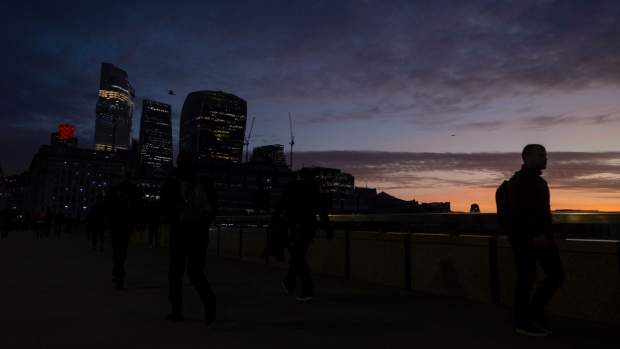 Commuters walk along London Bridge in the City of London, UK, on Monday Oct. 3, 2022. Traders are the most negative ever on the pound’s prospects, even after the UK government scrapped one of its new tax policies, a sign it will take a bigger policy U-turn to restore credibility with markets. Photographer: Carlos Jasso/Bloomberg , Bloomberg

(Bloomberg) -- The UK labor market is showing signs of cooling as workers and businesses prepare for a possible recession, a survey found.

The report by the Recruitment & Employment Confederation showed companies are starting to impose hiring freezes because of pessimism about the outlook, and employees are deciding “stay put” rather than apply for other jobs.

As a result, vacancies and the number of people placed in roles both rose at the slowest pace in more than a year and a half.

Candidates remained in short supply, however, and firms needing to fill positions were forced to pay up. The rate of starting-salary inflation moderated only slightly in September as workers demanded to be compensated for the soaring cost of living.

“With unemployment at record lows, pay continues to rise for both temporary and permanent workers starting new jobs, and activity levels across the recruitment and staffing industry remain high,” said Neil Carberry, chief executive of the REC. “While any economic slowdown this winter will affect the market, the extent of shortages mean that hiring will remain a focus for employers.”

The tightness of the labor market is a key concern for the Bank of England, which has raised interest rate seven times since December in an effort to prevent a wage-price spiral.

Further increases are anticipated in the coming year, worsening the plight of consumers and businesses already struggling with near double-digit inflation. Some economists say the economy may already be in a recession that could stretch into the early months of 2023.