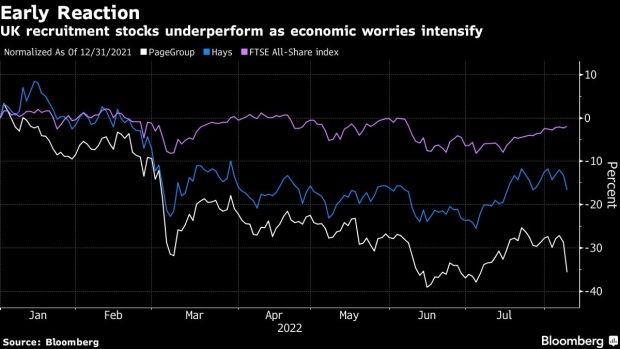 (Bloomberg) -- Recruitment companies’ shares fell after PageGroup Plc warned of a hiring slowdown as rising interest rates and inflation stoke fears that the economy will sink into a recession.

“In July, we noted a slight slowing in time to hire in some of our markets,” the Surrey, England-based Page said in a statement, citing a “heightened degree of global macro-economic and geopolitical uncertainty, particularly with regards to increasing inflation.”

The warning from Page comes as economists surveyed by Bloomberg News say UK output likely contracted in the second quarter. Gross domestic product data is due to be published on Friday.

Staffing companies’ shares tend to react early to an economic downturn and then outperform as bad news peaks, according to Citigroup Inc. “When the current macro storm abates, shares should correct towards normalized earnings-based valuations,” Citigroup’s Marc Van’T Sant wrote in a note, maintaining a buy rating on Page.

Page executives said on a call with analysts that hiring in July may have been affected by managers taking time off amid the recent heat wave.

“It’s the last couple of weeks in September that will really tell us whether things have slowed or whether actually this really was just a slightly early pack up for summer,” said Chief Financial Officer Kelvin Stagg.