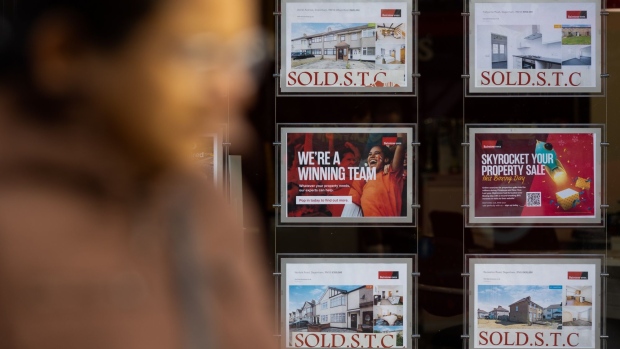 Property advertisements with "Sold STC (subject to contract)" signs in the window of an estate agents in Dagenham, UK, on Wednesday, Nov. 23, 2022. Barking and Dagenham is the only remaining London borough where house prices in the resale market have risen by double digits. Photographer: Chris Ratcliffe/Bloomberg , Bloomberg

The findings add to evidence that housing market may be headed into a more protracted downturn. Mortgage lender Nationwide Building Society last week said that home prices fell 1.4% in November, which, excluding the pandemic, represents the fastest drop since the global financial crisis.

“Some potential home moves have been paused as homebuyers feel increased pressure on affordability,” said Kim Kinnaird, director at Halifax Mortgages. “Industry data continues to suggest that many buyers and sellers are taking stock while the market continues to stabilize.”

House prices are now 4.7% higher than a year ago when the Bank of England started raising interest rates to choke off a jump in inflation. The central bank has signaled it’s likely to keep boosting rates, prompting investors to anticipate a half-point increase in the key rate to 3.5% next week.

Mortgage rates soared above 6% in the past few weeks, also the highest level since the global financial crisis. While they’ve ticked just below that level in the past few days, they remain substantially higher than the near 1% deals that were available in 2021.

For now, with 85% of mortgage holders on fixed rates, households are largely protected from high borrowing costs, but for those having to refinance in 2023, monthly payments are set to double.

Halifax said the only exception to slowing price growth continued to be the north east of England, where annual growth edged up slightly in November to 10.5% up from 10.4% the previous month.

London was the biggest laggard. Annual prices of homes in the capital rose just 5.2% in November, down from 6.6% in October.

In the past few weeks, property search websites Zoopla and Rightmove reported that sellers are cutting asking prices to attract buyers across the country. The Office for Budget Responsibility expects a 9% decline in house prices over the next two years.

(Updates with detail and comment from the second paragraph.)