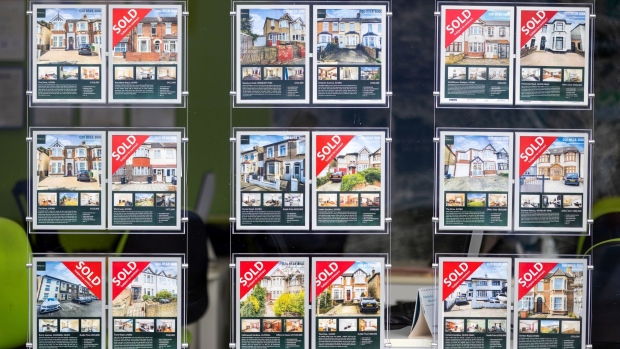 Properties for sale and sold in the window of an estate agents in London, UK, on Thursday, Oct. 13, 2022. UK estate agents turned pessimistic about the housing market, anticipating prices will decline over the next year for the first time since the start of the coronavirus pandemic. , Bloomberg

(Bloomberg) -- UK house prices fell the most since the start of the pandemic in October as political and market turmoil sent shock waves through the property market.

The figures add to evidence that the property market is now in the grip of a downturn, with experts predicting values could fall by more than 10%. That would erase some of the gains made over the last two years.

“The market has undoubtedly been impacted by the turmoil following the mini-budget, which led to a sharp rise in market interest rates,” said Robert Gardner, chief economist at Nationwide. “Higher borrowing costs have added to stretched housing affordability at a time when household finances are already under pressure from high inflation.”

Mortgage approvals plunged by 10% in September, Bank of England figures showed Monday, an early sign the pressures on affordability.

Property prices have been on the rise since early in the pandemic, with valuations buoyed by cheap mortgage deals and limited housing stock. In October 2022, Rightmove reported a continuation of the boom in UK property prices, propelled by price jumps on London’s most expensive homes.

Estate agents expect house prices to decline within the year, according to the Royal Institution of Chartered Surveyors, as high mortgages spook potential buyers.

Banks are particularly pessimistic, with Lloyds Banking Group Plc expecting a fall of 7.9% next year and analysts at Credit Suisse saying that house prices “could easily fall 10% to 15.”

Higher mortgage rates mean that typical first-time buyers are paying 45% of their wages to secure a property, Nationwide said. That’s similar to the level prevailing before the global financial crisis more than a decade ago and up from 34% at the start of the Bank of England’s current hiking cycle.

(Updates with chart, details from release and context.)