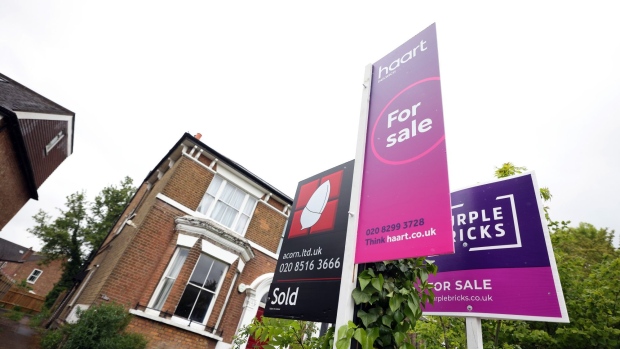 Estate agents boards outside residential properties in London, U.K., on Friday, May 21, 2021. After a year of shunning the capital amid lockdowns and coronavirus, many renters are now looking to return to urban life as restrictions ease, according to data from estate agent Hamptons International. , Bloomberg

(Bloomberg) -- The number of UK house sales fell in May, the latest sign that the red-hot property market is starting to cool.

Sales agreed in May were down 13% year-on-year, according to Zoopla’s UK House Price Index report. The average time to agree a sale is also rising -- taking 22 days in May, from 20 days in March.

“There are signals that the impetus in the market is slowing, and more price sensitivity in the market will spell a slowdown in price growth during the remainder of 2022,” Grainne Gilmore, Zoopla’s head of research, said in the report.

Zoopla also said house price growth in May was the lowest since December 2019, with average values up just 0.1%. It follows data from Nationwide Building Society on Thursday that showed prices grew 0.3% in June.

A lack of supply is a useful cushion after house-price gains of 11%-plus in the year through May, but slowing growth looks inevitable.

The figures suggest the UK property market is slowing as interest rates rise and a pandemic-driven boom starts to recede. The level of buyer demand, while still high compared to the five-year average, is beginning to return to more normal levels.

“As the pressure on supply from buyer demand starts to ease, it will put a brake on the intense upwards pressure on pricing,” the Zoopla report said.