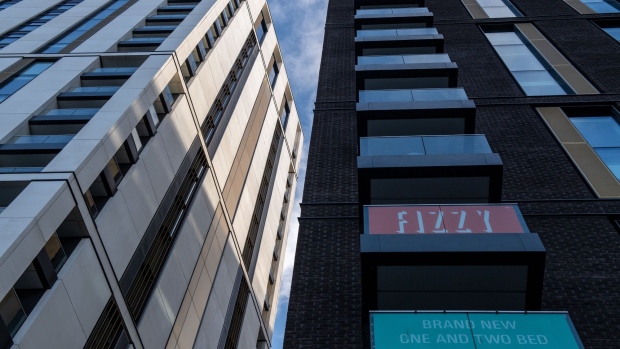 New apartment blocks at the Lewisham Gateway development in London, U.K., on Tuesday, Feb. 1, 2022. U.K. house prices registered their strongest start to the year since 2005 but the property market is set for a slowdown as the cost of living crisis intensifies, according to Nationwide Building Society. Photographer: Chris J. Ratcliffe/Bloomberg , Bloomberg

(Bloomberg) -- Demand for UK homes fell for the first time since August last month in an early sign that rising interest rates and the cost of living crisis are taking a toll on the property market, a survey found.

The monthly report by the Royal Institution of Chartered Surveyors suggests the housing market is now at a turning point, with estate agents claiming that buyers are “tightening their belts.”

An ongoing shortage of homes will keep prices rising “in the short term,” RICS said. Still, there was an increase in the number of respondents who expect sales volumes to decline in the next 12 months and a third successive fall in the number forecasting house prices to be higher in a year’s time.

“The increase in the cost of mortgage finance alongside growing concerns about the economic outlook is unsurprisingly having an impact, albeit a relatively modest one at this point, on buyer activity in the sales market,” Simon Rubinsohn, RICS chief economist, said.

UK house prices have risen 10.5% in the past year, Halifax said this week. However, the market is beginning to cool following a tenfold increase in interest rates to 1% and warnings that the economy is headed for recession. Mortgage approvals have dropped to their lowest level since June 2020, according to the latest Bank of England data.

The cost of living crisis is likely to be felt more acutely in regions of the country with typically lower incomes, according to a report by UK Finance on Tuesday. Overall, though, the effect on the mortgage market is likely to be muted as “the combined impact of price, tax and income changes through 2022 would translate to a little under 3% less disposable income for the average household borrowing in 2021.”

The RICS survey also showed sellers are still reluctant to put their homes up for sale. New instructions were largely flat during May, helping underpin prices for the moment, and respondents said the picture for appraisals was the weakest since December 2021.

That suggests “there is little prospect of more homes coming onto the market in the immediate future,” RICS said. ”Given constrained supply, house prices continue to rise.”

“Prices are likely to remain resilient into 2023. But as is often the case in these circumstances, the pressure is likely to felt more visibly in transaction levels which are likely to slow as the year wears on,” Rubinsohn said.

That theme was reflected by the comments from agents in RICs survey.

Jeremy Leaf, of London’s Jeremy Leaf & Co, warned that “successive monthly cost of living and interest-rate rises are resulting in lower quantity of enquiries.” Alexander James Mcneil, of Bramleys in Hudderfield, said “there is a sense that the party is nearly over with prices at their highest ever level and defying gravity.”

As demand for purchases cool, rents continue to be bid higher on surging tenant demand but a decline in landlord instructions. That poses “challenges for tenants who aren’t in the position to compete for the available stock,” Rubinsohn said.