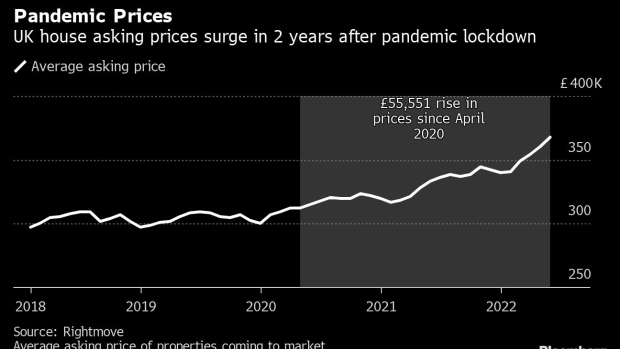 Rows of residential houses in London, U.K., on Tuesday, Dec. 14, 2021. Asking prices for homes on sale in the U.K. fell for a second month in December, indicating the property market lost momentum at the end of a strong year. Photographer: Chris Ratcliffe/Bloomberg , Bloomberg

(Bloomberg) -- Asking prices for UK homes rose to a new record for a fourth-straight month, though there are signs the market is starting to ease.

Rightmove Plc said price sellers are seeking when putting properties on the market rose 2.1% in May, the highest for the month since 2014. That marks a £55,551 ($69,275) jump since the housing market was halted at the start of the pandemic, almost 10 times the £6,218 increase in the two previous years.

The figures underscore the headache for the Bank of England, which wants to quell inflation after it reached a 40-year high. The bank has raised interest rates at each of its four past meetings, though that’s adding to a cost-of-living squeeze on consumers. Rents, too, are 40% higher than 10 years ago and increasing at the fastest pace on record, Rightmove said.

“We anticipate that the effects of the increased cost of living and rising interest rates will filter through to the market later in the year,” said Tim Bannister, a director at the property website. “A combination of more supply of homes and people weighing up what they can afford will help to moderate the market.”

The report, released on Monday, also showed that: