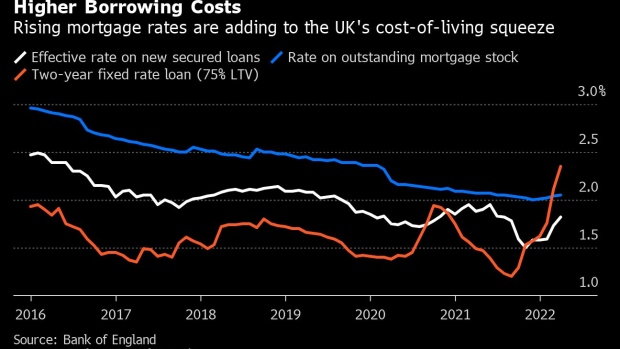 (Bloomberg) -- Bank of England Deputy Governor Jon Cunliffe said the UK housing market is starting to slow and will be dragged down by rising interest rates and easing economic growth.

“We see evidence of a slowdown,” Cunliffe said in an interview on ITV News on Wednesday. “There are some straws in the wind that show the market is starting to turn. The bank expects the economy -- that’s already slowing, and we expect it to slow further -- to slow quite a lot over next year or so. That will have an impact on the housing market.”

The remarks followed a 10th consecutive monthly rise in house prices, with the property market defying concerns about an intensifying squeeze on living standards.

However, Bank of England data yesterday suggested families are starting to feel the pinch, as mortgage borrowing slumped in May and consumers once again resorted to credit cards to help pay the bills.

Cunliffe’s outlook adds to widespread predictions that the housing market will soon succumb to the pressures facing the economy. Nationwide said that for now prices are being supported by a number of factors, including a shortage of homes for sale.

Prices have been boosted by people seeking space outside city centers after the pandemic left most office staff working at home at least part of the week, Cunliffe said. He also said savings built up in the pandemic have bolstered what buyers can offer.

“A lot of (the rise in house prices) is to do with the way the pandemic affected people and affected their preferences for where they wanted to live,” he said in the ITV interview.

“The other factor -- many people built-up savings simply because they couldn’t spend, so there is probably £200 billion of extra savings in the economy from that period. That also helped people go into the housing market to buy housing.”

He reiterated that the BOE will probably raise rates again to keep a lid on inflation, which has reached a 40-year high.

“Interest rates may well have to rise further,” Cunliffe said. “But there are also some features about interest rates which are different now to where they were 15, 20 years ago and it’s about balance of savings versus investment in economy.

“So while I expect interest rates -- having risen back to above pre-pandemic levels -- not to see levels we saw again over the last 12 months, I also don’t think we’re heading back to the interest rates of the 1990s,” he said.

He added: “I am certainly not predicting a crash in house prices. I think when rate of increase goes down, that is a correction, and then there’s a question of whether house prices rise faster than other prices.”