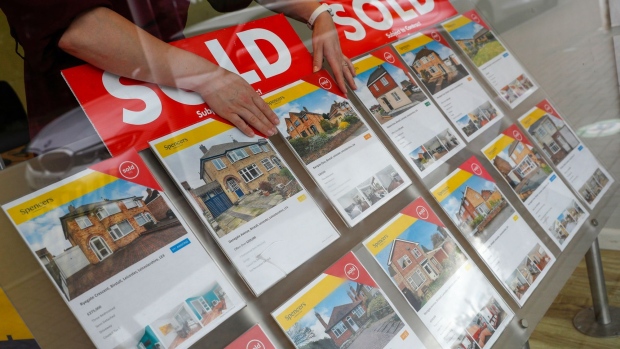 An Estate Agent arranges a window display at Spencers in Birstall, U.K., on Monday, July 5, 2021. Global valuations in the property markets are soaring at the fastest pace since 2006, according to Knight Frank, with annual price increases in double digits. Photographer: Darren Staples/Bloomberg , Bloomberg

UK house price growth slowed more than expected this month after a series of interest-rate increases raised the cost of mortgages.

“There are tentative signs of a slowdown, with the number of mortgages approved for house purchases falling back towards pre-pandemic levels in April and surveyors reporting some softening in new buyer inquiries,” said Robert Gardner, Nationwide’s chief economist.

The Bank of England has lifted interest rates steadily since December to quell inflation, which has reached a 40-year high. With policy makers signaling more increases in the months ahead, economists expect a slowdown in the property market, which remained buoyant throughout most of the pandemic recession.

“The Bank of England is widely expected to raise interest rates further, which will also exert a cooling impact on the market if this feeds through to mortgage rates,” Gardner said.