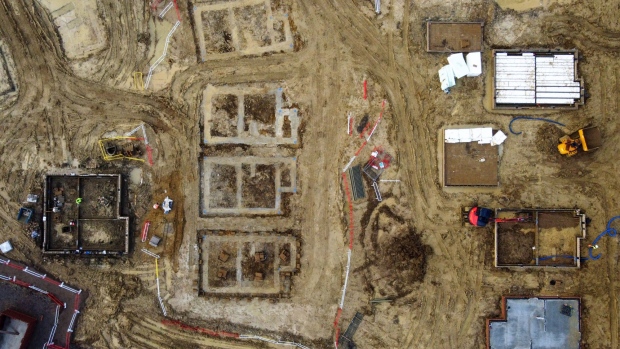 A Bellway Plc residential construction site in Bacton, UK, on Friday, Dec. 2, 2022. More than half of Britons planning to buy a home in the next two years said their home-buying plans had either been brought forward or remained unchanged, according to a Bloomberg Intelligence survey. , Bloomberg

(Bloomberg) -- The downturn in Britain’s housing market hit construction activity harder than expected in November, with orders drying up and mounting concerns about the outlook for the economy.

S&P Global said purchasing managers in the construction industry were the most pessimistic since the start of the pandemic in May 2020. Its index tracking output fell to 50.4 in November, the weakest in three months and down from 53.2 in October. While the index was above the threshold of 50 indicating growth for a third month running, economists had forecast a reading of 52.

The findings indicate headwinds facing the economy, with soaring interest rates and inflation dragging down the affordability of new homes. House prices have fallen over the past three months, prompting economists to warn of a more protracted downturn in the months ahead.

“New residential projects had been curtailed in response to rising interest rates, canceled sales and worries about the economic outlook,” Tim Moore, economics director at S&P Global Market Intelligence, said in a report released Tuesday. “Construction growth was largely confined to the commercial segment. But even here, the speed of expansion slowed considerably as client confidence weakened. A lack of new work to replace completed projects resulted in another fall for civil engineering.”

The industry reported average cost burdens rose sharply in November along with a jump in energy prices and tightness in the supply of goods and labor. Supply-chain friction is adding to the lead times necessary to buy construction materials and pushing up prices, S&P said.

Expectations for growth in activity continued to slide in November. Excluding the pandemic, sentiment matched the weakest levels since the global financial crisis in 2008.