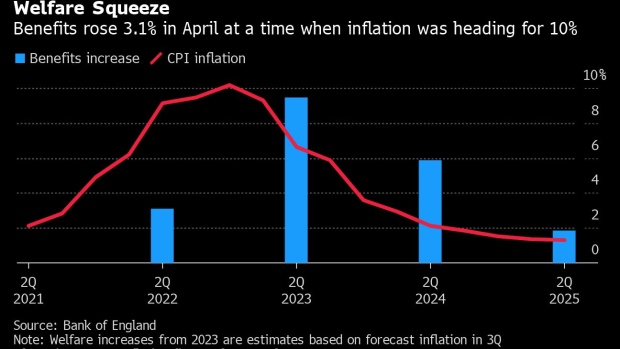 Britain’s inflation rate has surged to its highest level since 1982, piling pressure on consumer budgets as the nation’s cost-of-living crisis intensifies.

The increase is more than double the rate of basic wage growth, squeezing consumer spending power at the fastest pace on record. Almost 2 percentage points of the rise came from a jump in energy prices, while petrol and diesel costs also contributed.

The FTSE 100 Index barely moved during morning trading, a sign that surging prices have become a baked-in fixture of living standards. The pound retreated after staging its biggest rally in 17 months on Tuesday as investors flocked to the beaten-down currency.

The bad news for consumers is that price increases are set to intensify, with the Bank of England predicting double-digit inflation by October. Here’s a look at the areas where Brits will see their pockets stretched the most.

Residents of housing association properties could see a rise in costs, as rents and service charges are typically tied to inflation.

Price increases also determine how much benefits for Britain’s poorest households will rise by next April, which means welfare may experience a record bump at a time when inflation may have cooled. That’s prompted calls to bring forward some of that uprating to this year to smooth the impact.

Phone and broadband bills have jumped faster than inflation. Three of the UK’s mobile operators raised tariffs by 3.9% earlier this year.

As wallets have been squeezed, regulator Ofcom and senior politicians have pushed telecom companies to promote so-called cheaper “social tariffs” available to people on certain government benefits. In February, Ofcom said only 1.2% of those eligible had opted for them.

Rail fares in the UK usually rise in January, and are typically increased by the retail price index plus 1%. In 2022, the government delayed the price hike to March and said that it would cap it at 3.8%, still the steepest since 2013.

Fares are likely to continue rising in 2023 based on the current formula.

A global automobile production crisis, largely driven by a semiconductor shortage, has driven up used-car sales and prices through the pandemic. Surging inflation has also increased demand as consumers hold off splurging on new cars.

Used car prices have been more than 30% higher year on year since December, and were 32.2% higher in April, according to data from Autotrader.co.uk’s retail price index.

Budweiser owner Anheuser-Busch InBev NV and rival beermakers Heineken NV and Carlsberg A/S all delivered sales growth ahead of analyst estimates this quarter, largely driven by price increases. So far, drinkers returning to bars after lockdowns have been undeterred by having to pay more, with costs of brewers’ raw materials such as aluminum and barley soaring.

“Inflation continues to move very fast and is moving above or faster than what the expectation was,” AB InBev Chief Executive Officer Michel Doukeris has said. It’s “a little too early” to gauge how resilient demand for beer will be, given most of the brewer’s price increases were implemented late last year, he said.