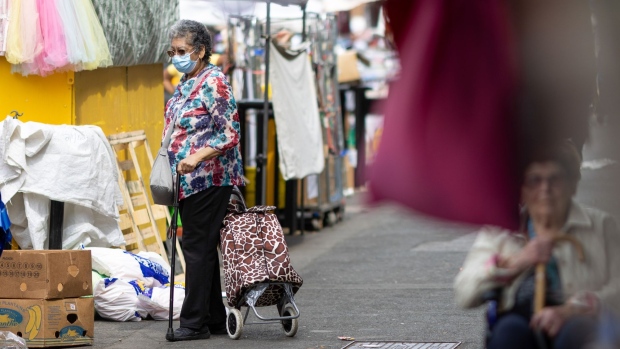 A customer browses stalls at a street market in London, UK, on Tuesday, May 17, 2022. The Office for National Statistics will release U.K. CPI Inflation figures for April on Wednesday. , Bloomberg

(Bloomberg) -- Britain’s inflationary shock is likely to be worse than feared, Bank of England Chief Economist Huw Pill said as he warned price pressures were “substantial” and further interest-rate increases will be needed.

In a speech to the Association of Chartered Certified Accountants in Wales, Pill spelled out the dilemma the central bank faces as soaring inflation threatens both to become embedded in domestic price setting and depress growth by squeezing household incomes.

On balance, Pill said “the balance of risk is tilted towards inflation proving stronger and more persistent than anticipated in that baseline.” The BOE expects inflation to reach 10.2% in October, up from a 40-year high of 9% currently.

The Monetary Policy Committee this month raised rates to a 13-year high of 1%, and money markets are pricing in 2.5% by this time next year.

On Friday, Goldman Sachs said it now expects the benchmark to reach 2.5% rather than 2%.

“Given more persistent wage and inflation pressures, we accelerate and revise up our expected path for Bank Rate,” Chief UK Economist Steffan Ball said in a note to clients. “We now look for the MPC to undertake a faster hiking cycle, raising Bank Rate by 25bps in back-to-back meetings through February 2023. As such, we have added two more hikes to our path.”

Pill was in the majority on the nine-member committee in voting for a quarter-point hike this month but three members wanted a half-point rise. Despite deciding to move in cautious steps, Pill said more rate rises will be necessary.

“We still have some way to go in our monetary policy tightening, in order to make the return of inflation to target secure,” he said. “Acting to achieve the 2% inflation target is now more important than ever.”

Pill echoed Governor Andrew Bailey’s observation that the BOE faces “its biggest challenge in over the past quarter of a century.” After years of negligible inflationary threats, “monetary policy is undergoing a transition,” he said.

However, he appeared to reject Bailey’s comment to UK Members of Parliament this week that the MPC was “helpless” in the face of global inflation. “This emphasis on the external drivers on UK inflation is not to suggest that UK monetary policy has no influence,” he said.

The terms of trade shock that the UK faces from imported price pressures caused by global supply chain disruptions and surging energy prices due to the war in Ukraine poses two-sided risks, he argued.

On the one hand, they may get into domestic price setting through wages or through businesses passing on higher costs. On the other, the hit to household incomes may depress demand and bring prices down as spending slows.

“The UK is a net importer of food, energy, goods, and all have gone up in price in the markets,” Pill said in response to questions after the speech. “What the UK is selling has gone down in price. We’re going to be squeezed through this. There’s something inevitable about that given structure of economy. The Bank of England doesn’t have a tool to offset the squeeze in incomes that’s coming.”

Pill said the threat of higher inflation was the greater risk. Wages are already rising faster than the BOE expected in February and surveys show that businesses are able to raise prices to protect their margins, Pill said.

Unemployment is at a near-50 year low and the corporate sector is passing on higher costs, particularly in “business-to-business” transactions, he said. A recent BOE survey found that “a further strengthening of margins is likely, especially in firms that are not directly facing consumer demand,” Pill said.

“At least over the coming year the potential for second round effects in domestic wage and price setting is obvious,” he warned. “On the back of this assessment, the current momentum in UK headline inflation developments is substantial.”