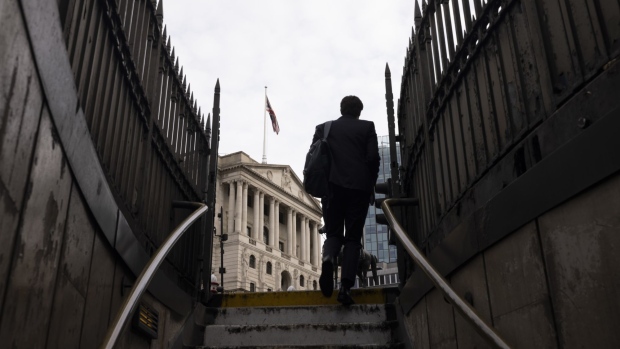 A commuter passes the Bank of England (BOE) in the City of London, UK, on Monday, Oct. 17, 2022. The Bank of England said it was restarting its corporate bond-selling as it looks to return to normality in the wake of a sustained selloff in UK assets. , Bloomberg

(Bloomberg) -- The Bank of England’s benchmark interest rate should peak below 4.5% if the central bank wants to avoid deepening and prolonging a recession, Swati Dhingra, the newest member of the bank’s monetary policy committee, said in an interview with the Observer newspaper.

“The market is probably underestimating what damage that (level of interest rates) might cause to the UK economy,” she said.

The central bank has raised interest rates eight consecutive times to push it’s benchmark to 3% in a bid to control soaring inflation. The rate-setting committee next meets on Dec. 15.

If tightening continues at the current pace, the bank risks “lengthening and deepening the recession,” she said.

Dhingra also blamed Brexit for contributing to the surge in food prices that is driving a cost-of-living crisis in the UK.

With three quarters of UK imports coming from the EU, it was natural for non-tariff barriers to kick in and raise prices after the UK left the common market, she said.

No matter which kind of analysis you look at there was a minimum economic hit from Brexit of 2% of GDP from trade effects alone, she said.