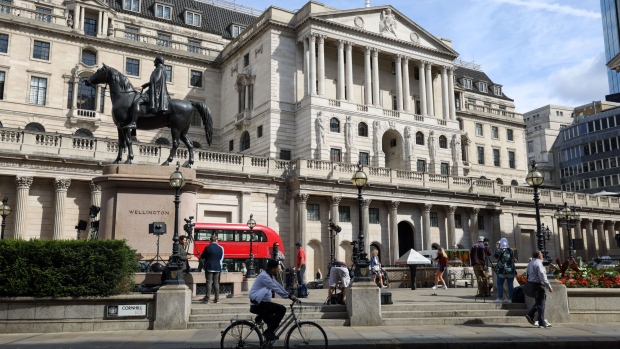 News broadcasters set up broadcast positions outside the Bank of England (BOE) ahead of the Monetary Policy Report news conference at the bank's headquarters in the City of London, UK, on Thursday, Aug. 4, 2022. , Bloomberg

(Bloomberg) -- The Bank of England may need to more than double interest rates by the end of this year to get inflation under control, said a policy maker who served at the central bank through the last financial crisis.

Andrew Sentance, now a senior adviser to Cambridge Econometrics, said the BOE’s key rate may need to rise to 3% or 4% because policy makers have “fallen behind the curve.” The rate is now 1.75%.

The remarks follow a stronger-than-expected jump in inflation to 10.1%, the first double-digit reading in four decades. Sentance served on the Monetary Policy Committee at the BOE from 2006 to 2011, setting rates during the global financial crisis.

“The Bank of England has been quite slow in responding and is clearly behind the curve in trying to get on top of this surge in inflation,” Sentance said in an interview on BBC Radio 4’s Today program on Wednesday. “They don’t have an easy job at the moment, but they do have tools at their disposal particularly interest rates, and they’ve been rather slow in moving them upwards.”

His concerns were echoed by Stuart Rose, the chairman of supermarket chain Asda Group Ltd. and former head of Marks & Spencer Group Plc. He faulted the government for failing to act immediately and criticised the two contenders in the race to replace Boris Johnson as prime minister for focusing on tax cuts.

“Inflation is pernicious,” Rose said on Radio 4. “It erodes wealth. I want to look after those people who cannot afford to take the hit, and we know who they are. I don’t think you can grow your way out of inflation. You need to kill inflation first. Of course you need to sew the seeds of growth. But you can’t do both.”

“What bothers me about the leadership election is everybody is throwing money at everything, and we can’t spend on everything,” Rose said. “It’s inevitable that interest rates go up. We’ve got to have some action.”