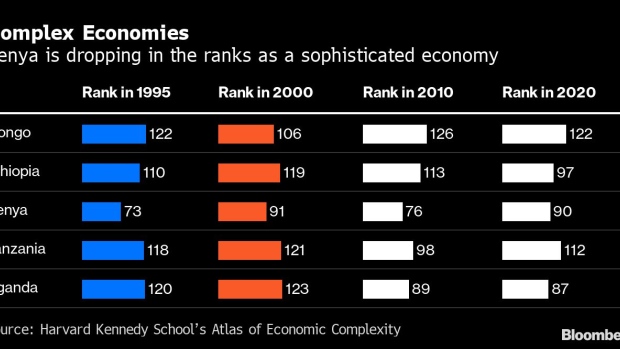 Commercial high-rise office buildings in Nairobi, Kenya, on Monday, Aug. 1, 2022. Kenyans will head to the polls on Aug. 9 to choose a new president in a contest pitting fifth-time contender Raila Odinga against William Ruto, a challenger who’s anchored his campaign on a rags-to-riches story. Photographer: Michele Spatari/Bloomberg , Bloomberg

(Bloomberg) -- British International Investment Plc will focus its funding in Kenya to companies in three industries critical to the East African nation’s economy.

The bulk of funding by BII, the UK government’s development-finance agency, will go toward finance industry, particularly tier one lenders. It will also invest in companies in the food, agriculture, manufacturing and export-focused industries, Seema Dhanani, BII’s country head in Kenya said in an interview.

Kenya, which is voting Tuesday to elect a new president, needs to create jobs fast. The number of unemployed youth in East Africa’s biggest economy is estimated at 14%, according to the International Labour Organization, and it needs the private sector’s help to boost employment.

“We support the private sector and we see them as a really critical tool for the economy here to grow,” Dhanani said in an interview with Bloomberg TV Tuesday. Kenya’s private sector is expected to overcome headwinds such as a weakening currency, rising inflation and mounting public debt, she said.

Infrastructure investments will support climate friendly projects and the transmission and distribution of renewable energy, Dhanani said. About 10% of UK government’s development-finance agency’s investment portfolio is in Kenya. BII has invested in 84 companies in the country, according to data on the agency’s website.