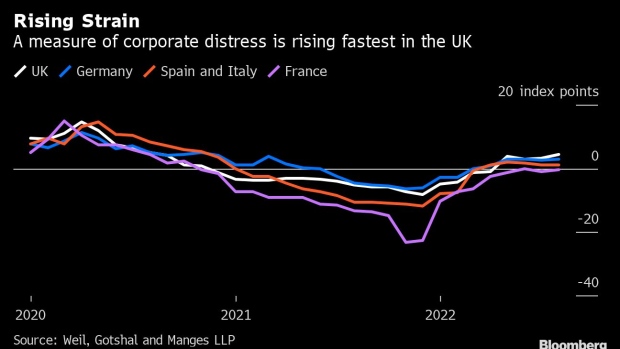 (Bloomberg) -- UK companies now have the highest level of distress among corporates in major European economies, with soaring inflation, rising interest rates and a weaker pound making life harder for British businesses, according to a report.

Law firm Weil, Gotshal and Manges LLP’s index showed that distress for UK-based companies in the third quarter rose to the highest level since August 2020 and overtook Germany, which was in the top spot last quarter.

UK “consumer confidence was already at an all-time low ahead of the recent fiscal response that triggered turmoil in the markets,” said Neil Devaney, a partner and co-head of Weil’s restructuring practice. “With borrowing costs set to rise steeply in the coming months, and real incomes expected to fall further, the outlook for UK businesses looks extremely challenging.”

More than a third of the bonds in a Bloomberg index of investment-grade sterling company debt were quoted at below 80 pence on the pound -- a generally accepted definition of distress -- on Tuesday. At the end of last year, just one bond in the index was trading at that level. A Bloomberg index of high-yield European bonds showed about the same proportion at distressed levels.

Weil’s aggregate index for Europe has also been rising this year, and is currently at the highest level since August 2020 amid pressure on liquidity and a deterioration of market fundamentals. The index tracks financial market conditions and company performance, using data from more than 3,750 listed European firms on metrics including profitability, liquidity and valuation.

Among sectors, the region’s retail and consumer goods businesses remained the most distressed, followed by the real estate sector and industrials. Smaller companies are under more pressure than bigger ones.

While some issues facing companies are Europe-wide, things seem worse in the UK. The Bank of England has raised rates more aggressively than the European Central Bank, while household energy bills are expected to more than double from the previous year.