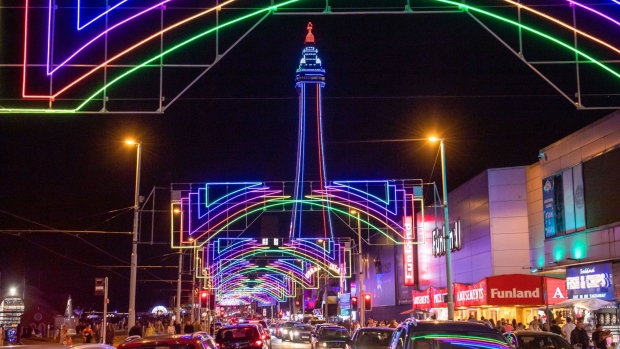 The Blackpool Tower, lit red, white and blue during the official period of mourning following the death of Queen Elizabeth II, at the Blackpool Illuminations annual lights festival along the Promenade in Blackpool, UK, on Saturday, Sept. 10, 2022. UK Prime Minister Liz Truss unveiled plans to freeze electricity bills for two years from October and introduce a cap to protect businesses for at least six months. Photographer: Anthony Devlin/Bloomberg , Bloomberg

(Bloomberg) -- The UK is still determining who will be able to access the £40 billion liquidity fund it’s creating for the energy industry, amid market rumblings that trading shops and hedge funds could also be eligible.

“We are working on the eligibility criteria for the scheme with the Bank and will update in due course,” a spokesperson for the UK Treasury said in a statement to Bloomberg News.

European governments are bailing out utilities across the continent as sharp swings in gas and power prices trigger sudden liquidity constraints via huge margin calls.

The Treasury and the Bank of England launched the Energy Markets Financing Scheme in early September as an emergency backstop for companies hobbled by increased collateral requirements in energy derivatives markets.

“There will be a rigorous assessment process, and firms will also have to agree to a wider set of conditions before accessing the scheme,” the government said at the time.