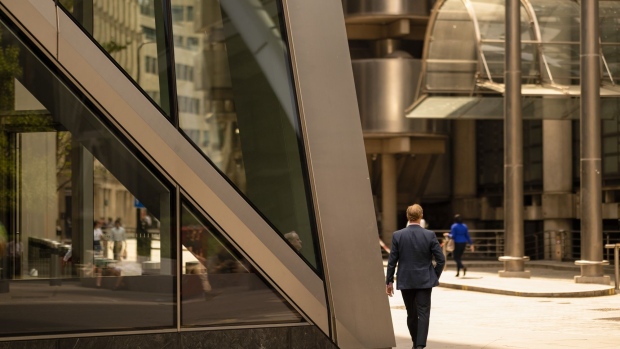 A worker passes The Scalpel building in the City of London, UK, on Monday, Aug. 15, 2022. The Office for National Statistics are due to the release the latest UK Labor Market Statistics on Tuesday. Photographer: Jason Alden/Bloomberg , Bloomberg

(Bloomberg) -- UK job vacancies grew in August at the slowest pace in 18 months, adding to signs that the labor market is starting to ease.

The KPMG and Recruitment & Employment Confederation report also showed the softest increase in starting salaries since June 2021, reflecting a slowdown in hiring and greater concerns about the health of the economy.

“August’s data show an increasingly challenging jobs market, both in the sharp decline in the supply of candidates and in the slowdown in recruitment,” said Claire Warnes, head of education, skills and productivity at KPMG UK.

The figures point toward less upward pressure on wage growth, something that’s been at the heart of the Bank of England’s concerns about inflation. Policy makers have signaled they’ll keep raising rates to head off a 1970s-style wage-price spiral after inflation hit a 40-year high.

The survey was complied by S&P Global and includes responses from a panel of about 400 UK recruitment and employment consultancies.