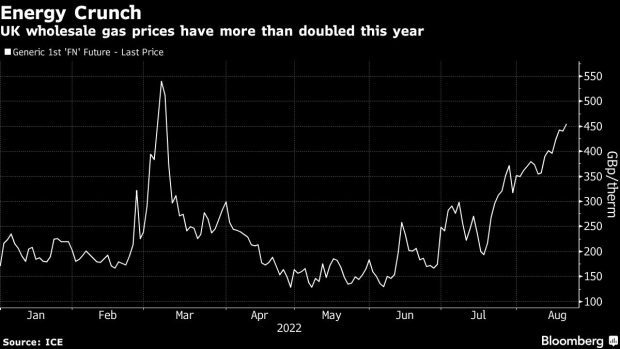 Tourists wearing sun hats walk through the shade around Parliament Square in view of the Houses of Parliament, during hot weather, in London, UK, on Thursday, July 14, 2022. In the second ballot of Tory MPs on Thursday, Rishi Sunak, former UK chancellor of the exchequer won 101 votes, ahead of Penny Mordaunt, UK trade minister, with 83. , Bloomberg

(Bloomberg) -- The UK Labour Party demanded an early recall of Parliament to tackle soaring household power and gas prices and stave off the worst effects of the cost-of-living crisis.

With analysts forecasting bills will be three times higher this winter than last, the utilities regulator Ofgem is due at the end of the month to set the new level of a price cap on domestic energy that will take effect in October. But the UK’s main opposition party said late on Thursday that households are already making “impossible choices” now to preempt higher costs later.

“With businesses and households on the brink, we cannot wait to act,” Thangam Debbonaire, Labour’s shadow leader of the House of Commons, said in a letter to Prime Minister Boris Johnson and the two candidates vying to succeed him, Liz Truss and Rishi Sunak. She called for the House of Commons to reconvene after its summer recess on Aug. 22, two weeks earlier than planned, in order to legislate to freeze domestic energy bills over the winter.

There’s little chance Labour will succeed in its demand for a recall: It wants to push through a £29 billion ($35 billion) plan to freeze bills at current levels until April, with the state absorbing the cost. But Johnson has vowed not to make any major new fiscal decisions that would hamstring his successor, and both Sunak and Truss have expressed skepticism about the opposition plan.

Truss, the front-runner in the leadership race, has warned against “throwing money” at a short-term fix while declining to flesh out her plans for helping the most vulnerable households over the winter. Meanwhile Sunak, the former chancellor, on Thursday called Labour’s plan a “blunt instrument” and a “gamble” that risks fueling a 1970s-style inflationary spiral.

“It’s really risky for a government to borrow an enormous amount of money and pump that into the economy,” Sunak told ITV in an interview. “That’s when inflation gets worse, it’s like putting fuel on the fire.”