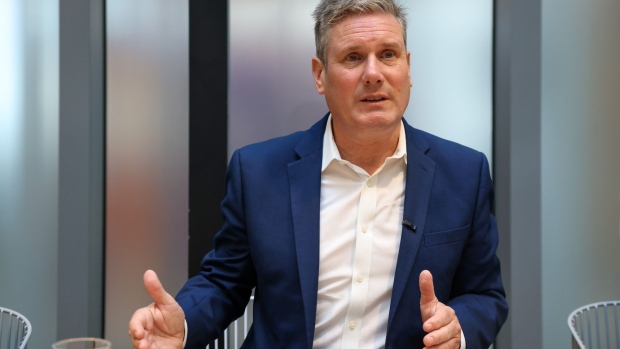 Keir Starmer, leader of the Labour Party, during a visit to the Natwest Plc headquarters in London, UK, on Monday, July 18, 2022. Starmer said his party would “reboot” the UK economy to boost growth, as he criticized what he called “unfunded” pledges to cut taxes that have dominated the rival Conservative Party contest to replace Prime Minister Boris Johnson. , Bloomberg

(Bloomberg) -- Keir Starmer will pitch the opposition Labour Party as responsible stewards of the UK economy as he seeks to capitalize on the market chaos sparked by the ruling Tories’ economic package on Friday.

In a speech to Labour’s annual conference in Liverpool on Tuesday, Starmer will vow to “fight the Tories on economic growth” and “turn the UK into a growth superpower,” according to excerpts emailed in advance by the party.

That’s an allusion to Chancellor of the Exchequer Kwasi Kwarteng’s “Growth Plan” on Friday, a budget in all but name that represented the biggest tax giveaway in half a century. The package sent the pound and gilts tumbling amid market concerns that it’ll push up inflation and the national debt.

The market ructions have buoyed Labour coming up to three years after the party sank to its worst electoral performance since 1935, a defeat that left many observers of UK politics predicting it wouldn’t be able to bounce back in time for the next general election.

But Labour has enjoyed a double-digit lead over the Conservatives in recent polls, and Starmer is seeking to portray it as a pro-business, center-ground party that’s changed since previous leader Jeremy Corbyn’s left-wing policies damaged its relationship with corporate Britain.

The pound on Monday hit an all-time low against the dollar, and efforts by both the Treasury and Bank of England to calm market nerves failed as their twin statements fueled a renewed selloff. The Treasury said it will publish a medium-term fiscal plan on Nov. 23, alongside a forecast by the government’s budgetary watchdog, while the BOE said it won’t hesitate to change interest rates “by as much as needed” to hit its 2% inflation target.

While the pound’s dramatic fall distracted attention away from Labour’s four-day gathering in Liverpool, it also provided fodder for the opposition party to attack the Tories with.

Starmer will say the Labour Party now stands for “sound money,” according to the excerpts. He’ll also commit to drawing up a long-term growth plan involving less government borrowing than Prime Minister Liz Truss’s economic strategy, in an attempt to create a clear dividing line between the two main parties, ahead of the next general election, which must be held by January 2025 at the latest.