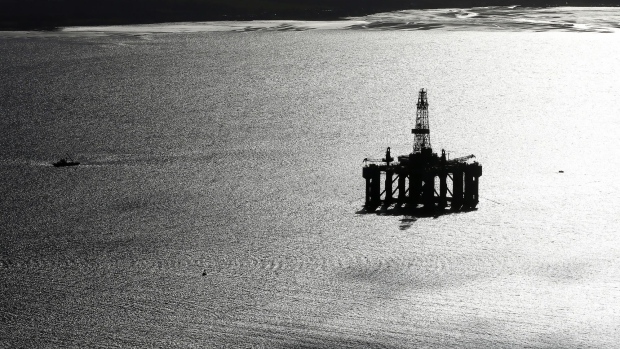 A boat passes a mobile offshore drilling unit in the Port of Cromarty Firth in Cromarty, U.K., on Wednesday, March 22, 2017. Even as oil production declined in the North Sea over the last 15 years, economic activity has been buoyed by offshore windmills. Photographer: Chris Ratcliffe/Bloomberg , Bloomberg

(Bloomberg) -- Rishi Sunak’s UK government could raise another £16.8 billion ($20.2 billion) from its windfall tax on energy companies if ministers closed loopholes in the levy and applied it to a longer period of time, the opposition Labour Party said.

Sunak in May announced the 25% tax on the profits of oil and gas companies when he was still Chancellor of the Exchequer, and as prime minister, he increased the rate to 35% in this month’s Autumn Statement.

But Labour -- which advocated the policy before the Conservative government adopted it -- on Tuesday said the government could be raking in billions more in tax revenue by backdating the levy to January, scrapping tax breaks Sunak introduced for firms that invest in oil extraction in the North Sea, and raising the rate.

“Labour would be making fairer choices -- fairly taxing the windfall profits of war, instead of diving into working people’s pockets first,” Shadow Chancellor Rachel Reeves said in a statement.

The opposition party argues Sunak’s tax breaks enable energy giants to reduce their tax bills at a time of inflated profits caused by Russia’s war in Ukraine. Shell Plc, for example, has paid no windfall tax despite making record global profits this year.

Labour estimated that scrapping investment allowances would raise an extra £10.6 billion over the lifetime of the levy which is due to expire in 2028. The government, for its part, argues the incentives are essential to boost British energy security and end reliance on imported gas and coal.

The opposition said backdating the levy to the start of the year would raise an additional £2.6 billion, while lifting it to 38% to match the total tax on energy companies with that of Norway, would raise £3.6 billion.

As things stand, the government’s fiscal adviser, the Office for Budget Responsibility, estimates the windfall tax -- officially called the Energy Profits Levy -- will raise £7.2 billion this year and £10.8 billion in the 2023-24 tax year.