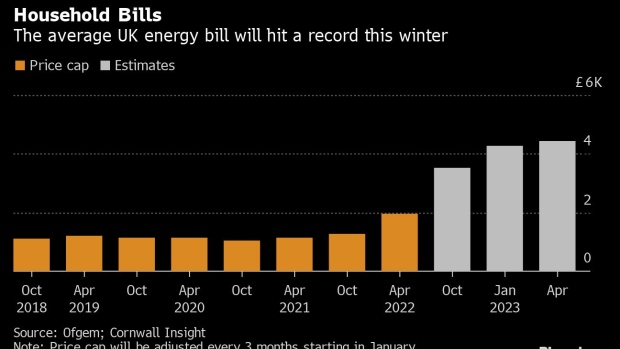 A tug passes the Esso Fawley Oil Refinery, operated by Exxon Mobil Corp. in Fawley, near Southampton, U.K., on Friday, Feb, 25, 2022. Oil traded near $100 a barrel in London after surging to a seven-year high amid fears that Russia’s invasion of Ukraine will impact supplies from the world’s second-biggest crude exporter. , Bloomberg

(Bloomberg) -- The UK’s main opposition Labour Party has proposed extending Britain’s windfall tax on oil and gas companies, saying the proceeds should be used to fund a total freeze on energy bills over the winter.

Labour -- whose initial proposal for a windfall tax was ultimately copied by the governing Conservative Party after months of pressure -- said the levy should be backdated to January, raising an extra £8 billion to help finance freezing the current £1,971 ($2,392) annual limit on household energy bills.

The Labour plan, to be announced by leader Keir Starmer on Monday, will put renewed pressure on the UK government and leadership contenders Rishi Sunak and Liz Truss to come up with new proposals to mitigate what threatens to be the nation’s biggest cost-of-living crisis in decades. Analysts predict the typical annual household energy bill will jump in October to more than £3,500, and to in excess of £4,200 in the first quarter, a crushing blow for many homes.

“This is a national emergency,” Starmer said in a statement. “Labour’s fully-funded plan would fix the problems immediately and for the future.”

Warnings that millions of low-income Britons face misery as power prices spike are dominating the national conversation. And with inflation rampant, interest rates rising and strikes bringing train service to a halt, Britain is already beset by what’s been dubbed a summer of discontent.

The weeks-long leadership battle between Truss and Sunak to replace Boris Johnson has exposed paralysis at the heart of government, even as the economy sputters toward what’s been predicted to be a recession lasting more than a year. Johnson is staying on until his successor is named in early September, but his administration won’t make any major fiscal decisions in the mean time.

Labour said freezing the energy price cap would cost £29 billion, paid for with the extra £8 billion from oil and gas firms, £14 billion from already-pledged government funding and £7 billion from reducing the government’s debt interest payments on inflation-linked bonds.

Johnson’s government introduced the initial 25% tax on the profits of oil and gas firms in May after Labour had called for the policy in January, hitting companies such as Shell Plc and BP Plc. The UK is still weighing whether to also levy the tax on the profits of electricity generators.

Truss, who is the front-runner in the race to be Britain’s next premier, has said she opposes introducing new windfall taxes, while Sunak says he’s open to the idea.

The British government is also drawing up other options for how to reduce bills over the winter, ready to be chosen from by the new prime minister when they take their post on Sept. 6.

The Sunday Times reported one Treasury proposal is a lending program for suppliers that would reduce household bills by £400 this winter. Scottish Power Ltd. and E.ON SE, two of the country’s biggest energy suppliers, are proposing government-backed loans to keep prices capped, the newspaper said.