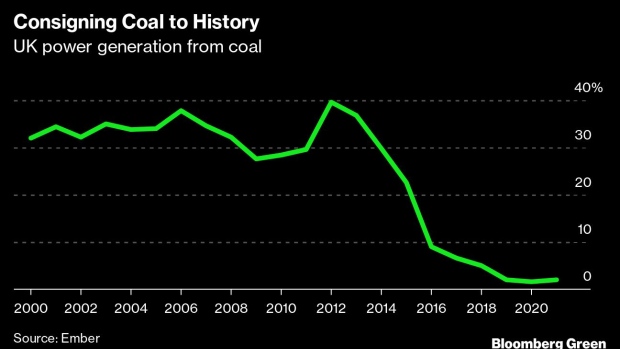 (Bloomberg) -- The UK is set to water down one of its key climate change policies as it battles soaring energy prices that have contributed to a cost-of-living crisis for millions of consumers.

Last year the government pledged to close all of Britain’s unabated coal-fired power plants by October 2024 -- and said it would enshrine that in law as soon as possible. But in an energy bill due to be published on Wednesday, there’s no mention of the date, according to fact sheets and a ministry statement detailing its contents.

A spokesperson for the Department of Energy, Business and Industrial Strategy, didn’t immediately respond to a request for comment.

The UK, which hosted international climate talks last year, is grappling with a once-in-a-generation energy crunch, caused in part by Russia’s invasion of Ukraine. Soaring natural gas prices have led to a revival in coal -- the dirtiest fossil fuel -- as energy companies look for cheaper alternatives.

The government had previously planned to close all unabated coal-fired plants -- those without a mechanism to curb emissions -- by 2025. Last year, in the run-up to the COP26 talks, it moved forward the closure date by a year, with the aim of legislating “at the earliest opportunity.”

The move was designed to prove the UK was showing leadership on climate, as it tried to convince other countries to “consign coal to history.” At the time of the announcement, the government also confirmed that the Secretary of State wouldn’t be given powers to suspend or modify the arrangements.

The full energy bill, which will be presented to Parliament on Wednesday, is designed to marry the twin goals of boosting energy security while tackling climate change. The government is seeking net-zero emissions by 2050.

The legislation includes plans to extend a price cap beyond 2023 to help protect consumers from rising costs, as well as measures to nationalize part of National Grid Plc’s business in the form of a Future System Operator. The bill also seeks to encourage more people to replace gas boilers with heat pumps.

Business and energy secretary Kwasi Kwarteng, under growing pressure to keep the lights on, previously agreed to extend operations for at least one coal power plant that would have otherwise closed this year. Electricite de France SA signed a deal to keep a unit of its West Burton A coal plant on standby in case it’s needed this winter.

Kwarteng met with the Prime Minister Boris Johnson and Chief Whip Chris Heaton-Harris earlier this week to discuss the energy security bill, according to two people familiar with the matter. Another person, who had recently been on calls where the coal-plant closure date had been discussed, said the policy is to only run coal plants for longer in an emergency.