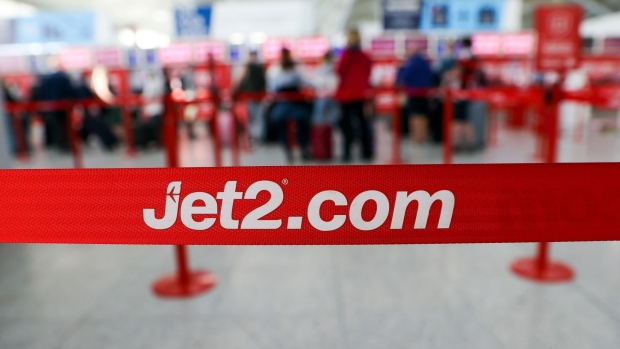 A Jet2 Plc sign at the check-in area at London Stansted Airport, operated by Manchester Airport Plc, in Stansted, U.K., on Monday, July 5, 2021. Jet2 will be making their next earnings announcement on July 8. Photographer: Chris Ratcliffe/Bloomberg , Bloomberg

(Bloomberg) -- Jet2 Plc hit out at British airports over the turmoil gripping the travel sector, calling their failure to recruit sufficient staff ahead of the rebound in demand “inexcusable.”

Most of the UK leisure carrier’s UK base airports were “woefully ill‐prepared and poorly resourced” for the volume of customers they knew to expect, Executive Chairman Philip Meeson said in an earnings update Thursday.

A number of key suppliers are also guilty of poor planning, Meeson said, including on-board caterers and providers of passenger-mobility services, despite flights having been on sale for many months and load factors being “quite normal.”

“Atrocious customer service, long queues for security, lack of staff and congestion in baggage-handling areas, and the consequent airport congestion, together with the frequent lack of on-board catering supplies, have each contributed to a very much poorer experience,” Meeson said.

Manchester Airports Group, which owns Manchester, London Stansted and East Midlands Airports, from which Jet2 operates, said separately that it has recruited 1,500 new staff since January and that passengers can look forward to the “best possible experience” this summer.

“I am sure they will all play an important role in our recovery over the coming months and years,” Chief Executive Officer Charlie Cornish said of the new hires in an earnings release.