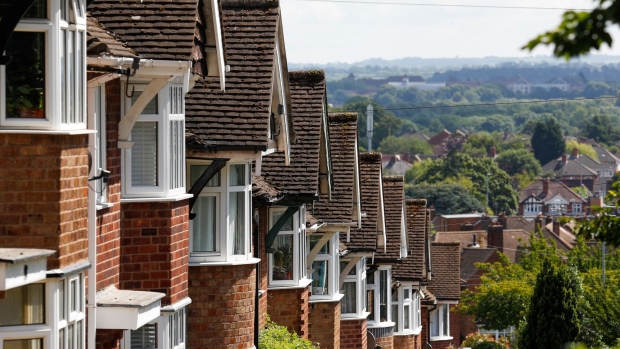 A terrace of homes on a hill in Birstall, U.K., on Monday, July 5, 2021. Global valuations in the property markets are soaring at the fastest pace since 2006, according to Knight Frank, with annual price increases in double digits. , Bloomberg

UK lenders are expected to hike mortgage prices in quick response to the Bank of England’s decision to raise rates by the most since 1995, the latest headwind for the country’s slowing property market.

“I expect we will see a raft of increases from lenders pretty speedily, often with little notice, in the coming days,” said Andrew Montlake, managing director at mortgage broker Coreco.

It comes after Zoopla warned this week that house price growth in the UK will come to a halt if mortgage rates hit 4% and values will probably dip if rates climb above that level. The average five-year fixed rate mortgage has already breached 4% this month, Moneyfacts Group Plc said on Thursday.

The country’s red-hot housing market is facing a series of challenges that are expected to damp demand for properties that are more unaffordable than ever. The Bank of England warned the UK is heading for more than a year of recession amid a cost of living crisis.

More than 3 million homeowners are due to see their fixed-rate deals expire either this year or next, according to data compiled by UK Finance. Many of the borrowers will still be able to secure lower repayments than at present as competition among lenders has cut margins.

Still, the rate offered on a average five-year mortgage has risen by about 0.7% to 4.01% since June, according to Moneyfacts Group Plc. A two-year fixed is approaching 4%.

“Borrowers who have not locked into a fixed rate would be wise to move quickly to secure a new deal as interest rates continue to climb,” said Rachel Springall, a spokeswoman for Moneyfacts. “Fixing for longer may be in the mindset for some, as there is anticipation for further base rate rises to come.”

Some lenders had already increased rates this week in anticipation of the BOE hike, Montlake said.

“We will still see some lenders change in the next few days as they do not want to be left the cheapest” and risk being inundated with applications, he said. “Lenders want to protect their service levels as well as protect their financials.”