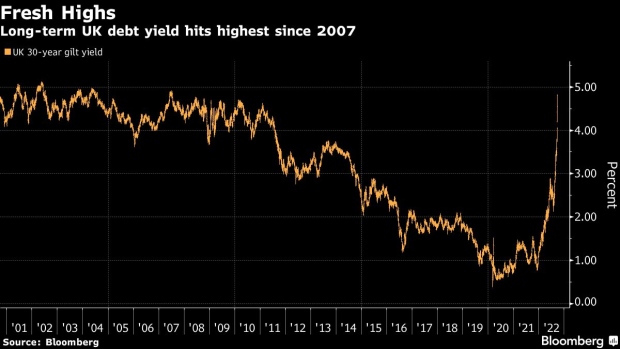 The Bank of England in the City of London, U.K., on Wednesday, Oct. 20, 2021. The U.K. Treasury is resisting pressure to increase spending in next week's budget because of concern that doing so would backfire by prompting the BOE to raise interest rates more aggressively. , Bloomberg

(Bloomberg) -- The UK government’s long-term borrowing costs soared above 5% for the first time in two decades as investors braced for a flood of bond supply and aggressive rate hikes.

The market suffered another day of meltdown, wiping out a relief rally earlier, as the government vowed to plough ahead with fiscal stimulus that the Bank of England’s chief economist said requires a significant policy response. That led money markets to bet on four percentage points more interest-rate hikes by May, which would take the BOE’s key rate to 6.25%, the highest since 2001.

The selloff has wiped out billions in bondholder value and leaves investors demanding more yield to hold the nation’s debt than Greece. With the government planning to significantly lift borrowing, policy makers are under pressure to respond to the market’s fears or risk further turbulence.

“This is a crisis of confidence in government borrowing rather than currency,” said Gordon Shannon, a portfolio manager at TwentyFour Asset Management. The pound was little changed on the day at $1.0668 after bouncing back from a record low on Monday.

The latest leg of the sell off was so forceful the spread between the five- and 30-year section widened the most since 1997, a sign investors worry fiscal and monetary policy will remain far too loose.

Forced selling by pension funds may have compounded the moves, according to David Parkinson, sterling rates product manager at RBC Capital Markets. They tend to own long-dated debt to match liabilities that stretch decades into the future.

“The steepening of the long end today and yesterday is down to upcoming supply and pension fund selling triggered by collateral calls,” Parkinson said.