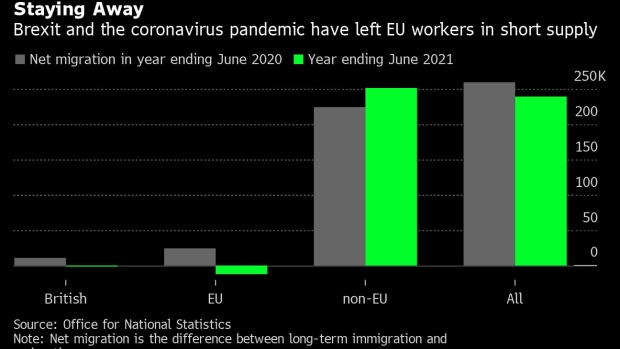 (Bloomberg) -- The UK recorded a loss of European Union nationals in the year through June 2021, reflecting the combined impact of Brexit and the coronanvirus pandemic.

The number of EU citizens who left the country during the period outnumbered arrivals by 12,000, according to figures published by the Office for National Statistics on Thursday.

The net outflow partly explains why companies are struggling to recruit workers, particularly in sectors such as hospitality and retail that relied heavily on EU workers before the pandemic struck. Britain’s tight labor market is helping drive up wages and inflation, ringing alarm bells at the Bank of England.

The migration data cover a period when the UK was subject to on-and-off lockdowns and restrictions, including curbs on international travel, to stop the spread of Covid-19. It also coincided with a tightening in immigration rules following the end of the Britain’s transition period for leaving the EU, which ended in December 2020.

“The impact of this on migration is difficult to disentangle from the effects of the coronavirus pandemic,” the statistics office said.

More than 190,000 EU nationals left the UK, a smaller number than a year earlier when almost 260,000 departed. Many of those who left did so in the immediate aftermath of the first lockdown in March 2020. However, the number immigrating into the country fell by 100,000 to just over 180,000.

The loss of EU nationals was eclipsed by net migration from elsewhere. Four times as many non-EU citizens arrived in the UK than exited. As a result, total net migration stood at 239,000, only marginally less than the previous year.

“Historically, a large part of non-EU net migration has been foreign students,” the ONS said. “Current analysis of available sources on international students suggests a recent increase in those coming from abroad to study in the UK.”